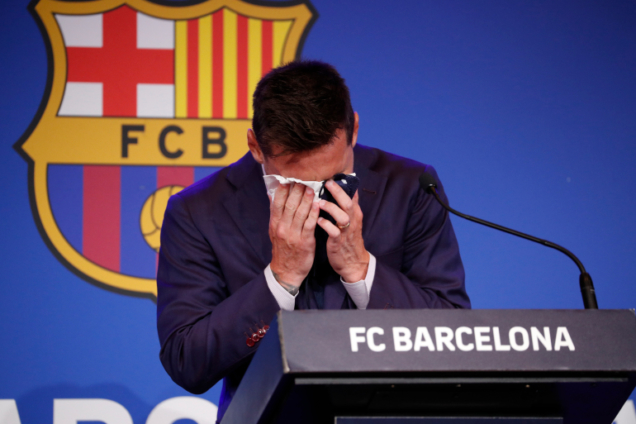 Barcelona fans gathered outside Lionel Messi’s house, eager for a glimpse of the club’s greatest football player, have spoken of their sadness at the Argentinian leaving after 21 years.

The date before, on Sunday, a tearful Messi bid farewell to the club he spent his entire career at.

Messi said he had agreed to a 50-percent pay cut in order to stay at Barca and sign a new contract but was unable to finalise the deal due to the Spanish league’s financial control rules and the club’s huge debts.

“I feel devastated,” said fan Cristian Garcia, wearing a Barcelona shirt with Messi’s name and number 10 on the back.

“To see a player that I have always followed, who is an example for me, to see him leave now brings me a lot of pain.”

Messi said that moving to PSG was “a possibility” but that he had not yet signed a deal.

French media have reported that he is on the verge of doing so, however.

There were no signs of movement around his house in the hills of the wealthy district of Castelldefels where he has made his home with his wife and three sons, although the player was expected to fly to Paris within a day or two.

Young Jonas Romero said he was “waiting to see if we can see Messi before he leaves for PSG”, adding that he wanted the player to sign his shirt and take a picture with him.

Another fan, Saul Moreno, added: “I don’t want Messi to go to PSG, but I know he’s going to go.”

Preparations in France are under way for Messi’s arrival. Fans in Paris gathered in hopes of catching a glimpse of the player who is expected to arrive Monday afternoon.

On Sunday night, dozens of PSG diehards gathered at the gates of Le Bourget airport to the north of the capital in the hope of catching a glimpse of their newest “galactico”.

Before signing the contract in Paris, Messi would first have to undergo a medical examination. He has not confirmed whether he will be joining the club.

The precautions and safety measures the authorities have to take. Usually it’s done when a VVIP arrives. Messi is massive. pic.twitter.com/7O0NQxyeqo