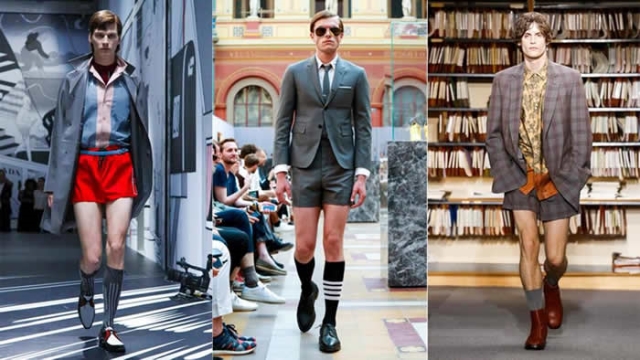 From elaborate embellishments to short shorts, Bel Jabobs takes a look at the high fashion likely to influence the high street in 2018.

As ever in high fashion, it can be difficult to relate to the the glitz and glamour of catwalk shows and the front row. But the seeds of mainstream trends are always there, ready to filter down onto our wish lists and into our wardrobes.

These are the looks from the eyries of top fashion designers most likely to set the tone for 2018.

While the sound of sheer may set off alarm bells, you might want to get acquainted with transparent fabrics. From diaphanous sheaths at Dries Van Noten and gauzy ball dresses of Emilia Wickstead to clear plastic macs at Fendi and Chanel, this look is here to stay. You need go only as bare as you dare and treat see-through fabrics as styling opportunities. Don a clear leaf-print dress, as at Burberry, but wear a t-shirt and shorts underneath. Or layer sheer over sheer to create glossy, multi-dimensional textures. See? Not so bad after all.

If it moves, shimmers or glitters while you walk, then wear it. From Saint Laurent’s cloud of a dress covered in white ostrich feathers and soft-shouldered coats shot through with sequins and floral embroidery at Dries van Noten and Rochas, to the swish of all-over fringed dresses at Celine and Balmain, designers have embraced lavish detail, turning catwalks into parades of exotic birds. This is fashion as its most frivolous, fully expressing its function of beautiful escapism: even should the world burn, dance like a phoenix.

Fashion’s yen for transforming wardrobe staples into items of pure beauty continues apace. This year, it’s the turn of the trench coat, originally developed as an alternative to the heavy greatcoats of the First World War. Sarah Burton at Alexander McQueen offers a trench delicately threaded with black rose embroidery while Celine’s cape-coat was joined at the hem to create a garment of almost highwayman-like romance. But it was John Galliano at the original house of deconstruction Martin Margiela who won this particular game: slicing trenches with feathers, splicing them with mirrored squares and cinching them at the waist with crimson kimono belts.

Earlier this year, with the immortal words “I don't think it's still modern,” Gucci’s CEO Marco Bizzarri announced that the luxury label was going fur-free, joining others including Giorgio Armani, Calvin Klein, Vivienne Westwood and longtime eco stalwart Stella McCartney. Animal lovers the world over have let out a huge sigh of relief. Gucci’s decision represents a monumental step in ethical fashion, as shoppers clock onto some of the world’s most pressing challenges – of energy, of waste, of pollution, of human and animal rights. Sales of ethical clothing in the UK alone were up by 22.4 per cent in 2017 in a sector worth £36 million, according to Triodos Bank and Ethical Consumer. In short, seekers of vegan leather boots, organic cotton t-shirts and recycled plastic board shorts: go wild.

Shorts slam back into mens fashion in 2018 – but we don’t mean easy-going cargo or safari styles. Prada dealt out red micro boxers with sportswear detailing, while Louis Vuitton offered lean-cut black leather shorts. Often, short shorts were paired with otherwise conventional pieces – a suit jacket at Thom Browne, slouchy tweed at Dries van Noten – to create a styling tip for the ordinary punter: go as brief as you care to and then pretend nothing else is amiss.

Designers are using a spirit of rebellion as well as a continuing fascination in genderless fashion to push identity frontiers. Skirts for men appear in the work of eternal provocateur Vivienne Westwood as well as Thom Browne, Alexander McQueen, Loewe (helmed by JW Anderson) and Craig Green. The bifurcated leg wear known as the trouser is now just one option. Think kilts, think sarongs, think exoticism, think new definitions of masculinity. You’re halfway there.

Silhouettes are going supersized with loosely structured jackets and trousers billowing from shoulders and from hips, as if their wearers have ever so slightly shrunk. Big jackets – often over matching trousers – show form at Ermenegildo Zegna (in pink), Kenzo (in purple, with shorts), Y/Project (enormous and embroidered with silver). High waists – the waist a new focal point – topped trousers so exaggeratedly wide, they were two cuffs short of a zoot suit. The effect is an oddly glamorous dishevelment; a dashing, faintly devil-may-care boyishness. Chaplin never looked this good.

The rugged outdoors continues to hold fascination for designers and wearers alike and it’s not hard to see why. Where better to explore tropes of traditional menswear than in a range of handy water-resistant hoodies, tracksuit tops and tracksuit trousers in technical fabrics with all the right zips and pulleys? Except, 2018 being what it is, nothing is quite as it seems. Valentino’s anorak is decorated with elaborate detailing, Kenzo’s comes in candy colours. Z Zegna’s sailing gear is as yellow as the sun and Hermes’ duffle coat is as sleek as they come. Practical and pretty: what a winning mix.

Few themes have dominated menswear catwalks like workwear. In 2018, it’s the turn of the boiler suit, the all-in-one, the jumpsuit – perennial favourite of mechanics and aviators – to take, controversially, to the stage. We say controversially, because it’s hard to work out quite where to wear Prada’s sexy navy zip-up onesie, Alexander McQueen’s palm print take on the shape or Missoni’s pyjama check. To the office, on a first date, walking the dog, to lunch with the in-laws? But that’s the beauty of this look. You can make it your own. And isn’t that what fashion is all about?