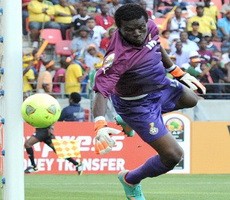 Ashanti Gold keeper Fatau Dauda says he is not disappointed with Coach Avram Grant's decision to leave him out of the Black Stars squad for the final African Cup of Nations Qualifier game against Rwanda.

Despite his impressive performance for Ashanti Gold, the 31 year old was not included in the 23 man squad.

And the Ashanti Gold goalie says he is not disappointed to have been left out but rather needs to work hard to secure a place next time.

“I just have to work hard and make sure I earn a call-up next time. I need to improve on my performance so I will be invited.”

The Black Stars will begin Camping in Accra Next week in preparations for their final Cup of Nations Qualifier against Rwanda.