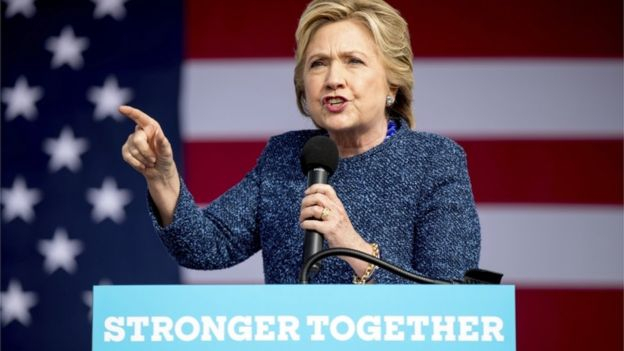 Investigators discovered the emails "in connection with an unrelated case… that appear to be pertinent to the investigation", he said.

The FBI has already found the Democratic candidate had sensitive information on a private email server.

But the newly discovered emails did not come from her private server and it is not clear if she sent them.

Mr Comey had previously called Mrs Clinton's handling of classified material during her 2009-13 tenure as secretary of state "extremely careless", but cleared her of any criminal wrongdoing.

Devices belonging to Mr Abedin and Mr Weiner, a disgraced former New York congressman, were seized as part of an FBI inquiry into whether he sent sexually explicit emails to a 15-year-old girl in North Carolina.

The FBI chief said in his letter to Congress he "cannot yet assess whether or not this (Clinton email) material may be significant, and I cannot predict how long it will take us to complete this additional work".

It could be nothing. It could be everything. And it almost certainly won't be resolved before Americans head to the polls in just under two weeks.

The letter from Mr Comey to Congress is frustratingly vague. There's no information on what the "unrelated case" is that led to a re-opening of its investigation into Mrs Clinton's server, for instance, or how many emails are in question. That will only fuel the rampant speculation already breaking out, with leaks from "government sources" in the coming days sure to fan the flames.

Mrs Clinton's critics will go on the attack, using the latest news to support their claims that the former secretary of state engaged in malfeasance. Her supporters will spend the next few days in a defensive crouch, trying to assess how bad the damage could be

What's certain, however, is that whether this turns out to be a big deal or not, it places the spotlight on all the wrong places for the Clinton campaign. It all but guarantees that even if she wins White House, the early days of her presidency will be dogged by this long-running political imbroglio.

The potential bombshell comes just 11 days before Americans go to the polls in the presidential election.

Mrs Clinton is five points ahead of her Republican rival Donald Trump, according to a Real Clear Politics average.

She has yet to respond to the latest developments, which occurred during her flight to Cedar Rapids, Iowa, where she is holding a rally.

What a difference a plane journey makes. When we left Westchester, New York, on Hillary Clinton's campaign plane, spirits were high amongst her staff.

Her campaign manager, Robby Mook, came to the back of the plane and told reporters that early voting was going in their favour and that Mrs Clinton would even campaign in Republican-leaning Arizona next week.

But Mr Mook added that they weren't taking anything for granted. He said: "Hillary is superstitious."

When we landed and wifi internet was restored, the Clinton team first learned the news of a reopened FBI investigation.

She was right to be superstitious.

As we got off the plane, one of her advisers told us: "We are just learning about this at the same time as you are."

Mrs Clinton stayed on for far longer than usual. Her team were digesting the news and working out how to respond.

When she did walk off the plane, she smiled and ignored shouted questions from the media on the tarmac about the long-running email saga.

At a rally in Manchester, New Hampshire, Mr Trump told a cheering crowd: "They've reopened the case into her criminal and illegal conduct that threatened the security of the United States of America.

"Hillary Clinton's corruption is on a scale we've never seen before. We must not let her take her criminal scheme into the Oval Office."

The revelation that she broke federal rules by running her own email server out of her home in upstate New York and handled sensitive information has damaged her trustworthiness ratings with voters.

The FBI announcement caused some concern on the markets, with the Dow Jones industrial average falling about 150 points in early afternoon trading in New York before making up the losses to turn positive later in the day.

He renewed his call for the Director of National Intelligence to halt classified briefings for the Democratic candidate.

"Yet again, Hillary Clinton has nobody but herself to blame," the House of Representatives Speaker and Wisconsin congressman said.

"She was entrusted with some of our nation's most important secrets, and she betrayed that trust by carelessly mishandling highly classified information."

Mrs Clinton's private email server was first revealed in March 2015 by the New York Times, as the former secretary of state was visiting the United Nations in New York.

During a press conference at the UN, she did not immediately express regret, and said the main reason for her "hdr22@clintonemail.com" address was "convenience".

Soon after that she apologised in an interview with ABC News, and has since said sorry to voters a number of times.