FBNBank Ghana unveils winners of ‘To Qatar We Go promotion’ 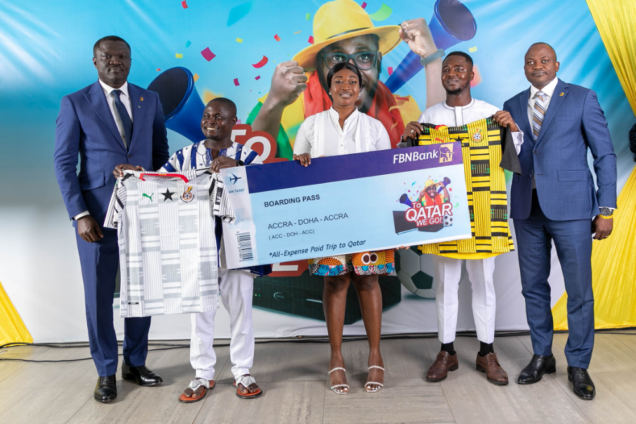 FBNBank Ghana has officially unveiled the winners of their World Cup Promo ‘To Qatar, We Go Promotion’ in a brief but exciting ceremony at their corporate head office.

The event was witnessed by customers, members of the media, management and staff of the Bank.

The FBNBank ‘To Qatar, We Go’ Promotion was launched in August this year by the Bank with the aim of garnering support for Ghana’s senior national team, Black Stars at this year’s FIFA World Cup in Qatar.

It was open to both FBNBank customers and prospects as well as members of the general public.

The ‘FBNBank To Qatar We Go’ promotion commenced on August 1, and ended on October 31.

The Promotion offered an all-expense paid trip to Qatar which was won by Hakeem Abuba, Seidu Kwaku Tawiah and Cynthia Nyarkoah, all customers of the Bank.

In all, ten customers of the Bank received prizes at the event.

Speaking at the ceremony, Victor Yaw Asante, FBNBank’s Managing Director said, “at the end of last month, we gathered here to draw the curtain on our ‘To Qatar, We Go Promotion’ under the supervision of the National Lottery Authority.

“Out of the many customers who took part, ten lucky ones were drawn as winners. Our brand enjoins us to put our stakeholders first and that is exactly what we have set out to do by supporting the Black Stars to prepare for the World Cup and to provide opportunities for Ghanaians to be behind them.

“The Bank has earlier made a cash donation of ¢200,000 to the Black Stars during their preparations for the tournament. This was the Bank’s contribution of putting the team in great shape in order to increase their opportunities to put in an improved performance at the World Cup.”

He added, “On the back of that support, we rolled out the ‘To Qatar, We Go Promotion’ for our customers. We wish all of you winners well as you journey to Qatar to support the national team. To our staff who made all this possible, I say thank you.

“Your passion for bringing to life what our brand stands for and making everyone appreciate what we mean by the ‘gold standard of value and excellence’ is commendable.”

The three winners of the first prize will travel to Qatar to take part in the football fiesta. They will join thousands of Ghanaians already in Doha who will be cheering on the Black Stars to win laurels for Ghana.

The winning customers were elated with the prizes they won and expressed gratitude to the Bank for the recognition and honour accorded them.

One of the winners, Seidu Kwaku Tawiah said, “FBNBank has really shown that they keep their word. Personally, I never dreamt that I will be a fan at a FIFA World Cup in my lifetime. However, FBNBank has made this possible.

“My new friends and I will offer all the support that we can to our players and hopefully, great things will happen. We thank FBNBank. God bless the staff immensely and we pray that they will continue to offer good services and products.

“The good thing is that the other customers who will not be joining us in Qatar got TV and decoders so they can also enjoy the matches. FBNBank has truly made us proud.”

FBNBank has in its 26 years of operating in Ghana remained focused on putting its customers and communities first.

This, it has sought to do through the rich value and excellence of what the Bank contributes to the relationship with its stakeholders as a whole, particularly the customers.

FBNBank Ghana is a member of the First Bank of Nigeria Limited Group which is renowned for its great customer service and general stakeholder engagement garnered over its 127 years of operation.

FBNBank Ghana has 23 branches and three service points across the country with close to 500 staff.

DISCLAIMER: The Views, Comments, Opinions, Contributions and Statements made by Readers and Contributors on this platform do not necessarily represent the views or policy of Multimedia Group Limited.
Tags:
FBNBank Ghana
To Qatar We Go Promotion
Victor Yaw Asante