‘Feminism’ is dictionary’s word of year

A leading US dictionary has named "feminism" as its word of 2017 following a surge in online searches.

Merriam-Webster said interest in the term was driven by women's marches, new TV shows and films on women's issues and the string of news stories on sexual assault and harassment claims.

The dictionary defines feminism as "the theory of the political, economic and social equality of the sexes".

It adds that it is also "organised activity on behalf of women's rights and interests".

In January the first spike in interest occurred after the Women's March on Washington and similar marches in cities across the world. Many wore pink knitted "pussyhats" in reference to controversial remarks Donald Trump was recorded making in 2005.

March organisers claimed that women's rights were under threat following the election of Mr Trump to the White House.

The following month, interest in feminism surged again when White House adviser Kellyanne Conway said she did not consider herself a feminist.

Speaking at a conservative event, she said she found it difficult for describe herself as a feminist because she was not "anti-male" and "pro-abortion".

She said she was a "product of my choices, not a victim of my circumstances", which she described as "conservative feminism".

There was further interest in the meaning of feminism with the release of the TV series The Handmaid's Tale, based on the Margaret Atwood novel, and the hit film Wonder Woman, Merriam-Webster said. 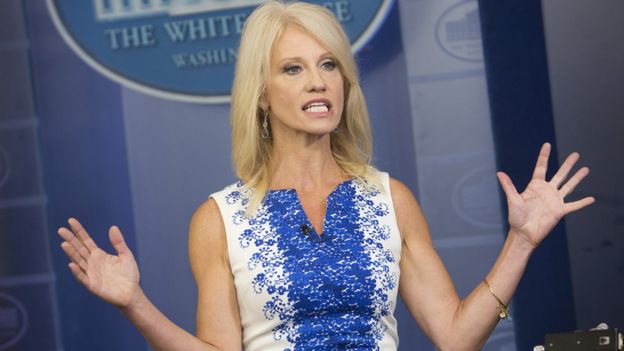 Kellyanne Conway said she described her views as 'conservative feminism"

"The word was in the air," said Peter Sokolowski, Merriam-Webster's editor-at-large.

More look-ups have been driven by the #MeToo movement in which millions of women shared experiences of sexual abuse following accusations against major Hollywood figures and others.

In the wake of the #MeToo movement, Time magazine named "the Silence Breakers" – women and men who had spoken out against sexual abuse – as its "Person of the Year".

Its cover featured five women – two of them celebrities – who had reported sexual misconduct, but said many more people were part of the movement behind the cover picture.

The dictionary said another much-researched word in 2017 was "complicit" which has been widely used in stories about President Trump's firing of FBI director James Comey and about the inquiry into alleged Russian meddling in the 2016 US election.

Interest spiked when President Trump's daughter, Ivanka, said she did not know what the word meant.

Dotard is defined as "a person in his or her dotage", with dotage described as "a state or period of senile decay marked by decline of mental poise and alertness".