Fidel Castro chides US ahead of embassy reopening 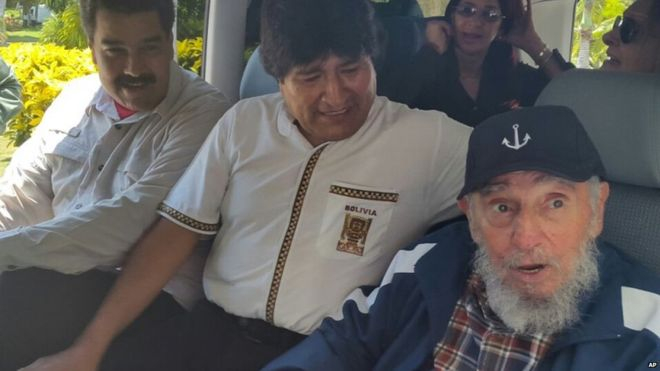 Former Cuban leader Fidel Castro has published an open letter to the nation in which he makes no mention of the historic reopening of the US embassy.

Mr Castro instead criticises American foreign and economic policies since World War Two and accuses the US of owing Cuba millions of dollars.

The letter was published to mark Mr Castro's 89th birthday.

The US embassy will be reopened in Havana on Friday, with US Secretary of State John Kerry attending.

Mr Castro said the US owed Cuba money because of the trade embargo the US imposed on the communist-run island in 1960.

Cuba says the embargo – which it calls a blockade – is hugely damaging to its economy.

It says relations will only be fully restored once it is lifted.

Three marines who lowered the American flag for the last time on 4 January 1961 will raise it again during Friday's ceremony in Havana.

They are now retired and in their late 70s.

"I'm gonna love seeing that flag go back up," said former marine Jim Tracy, 78, on a US State Department video.

In his birthday letter published in state newspaper Granma, Mr Castro says Cuba is committed to "good will and peace in our hemisphere" but adds: "We will never stop fighting for the peace and welfare of all human beings, regardless of the colour of their skin and which country they come from".

Fidel Castro led his country from the Cuban Revolution, in 1959, until 2006, when he stood down because of undisclosed health problems.

He passed on power to his younger brother, Raul, who embarked on a number of economic reforms.

After Raul Castro and US President Barack Obama announced in December that their two countries had agreed to restore diplomatic relations, it took Fidel Castro more than a month to express lukewarm approval for the historic reconciliation.

"I don't trust the policy of the US, nor have I exchanged a word with them, but this does not mean I reject a peaceful solution to conflicts," he wrote in a letter in January.