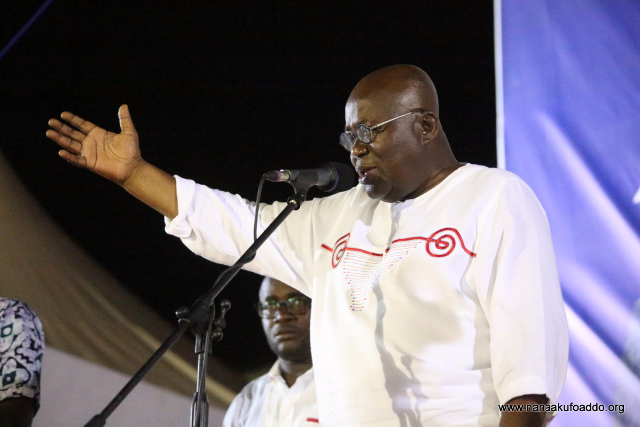 One of the main pillars of President-Elect, Nana Addo Dankwa Akufo-Addo's campaign was weeding out corruption from the Ghanaian body politic.

During the campaign, he repeatedly argued that the John Mahama-led administration was riddled with corruption and vowed to curb the canker by putting in place structures to deal with.

Ghanaians overwhelmingly voted for him and the New Patriotic Party (NPP) at the December 7 elections.

Nana Akufo-Addo, outlining how he will keep to his promise of fighting corruption as he takes office on January 7, told the BBC in an interview that, he will implement institutional reforms backed by his personal and government appointees’ exemplary leadership of not being corruptible.

This, he believes, “will go a long way to reducing the incidents of corruption in our national life and giving us the opportunity to put our society and economy on an even keel.”

While his target will not be a deliberate attempt to prosecute political opponents, the appointment of an Independent or Special Prosecutor will be key to rooting out corruption during his administration.

“We have decided that as much as possible we want to take the politics out of it so that screams of witch-hunting et cetera don’t arise by establishing an office of Special Prosecutor or somebody who will be independent of the Executive and whose remit will be to investigate and tackle issues of corruption and hopefully that person is going to be somebody who commands respect of the society and at the same time has an independent mind to make the decisions,” the President-Elect revealed.

Nana Akufo-Addo stressed that people in political office are not immune from investigation and prosecution when it comes to corruption. For him, “we are citizens of Ghana first and foremost,” and therefore cannot be immuned from being held accountale for our actions.

The President-Elect also complained that the NDC had the wrong people in the wrong places, a major contributory factor to the dwindling growth of the country’s economy.

To resolve that, he said there will be a “Broad agreement with our policy objectives. Whoever is coming in has to have that fundamental connect to the group of ideas that are set out in the manifesto that [we] have articulated.”

His appointees, he said, will have “the competence, the capacity to master the briefs that are going to be given to them and carry them out,” and they will also possess, “the commitment to the Ghana project. The loyalty to Ghana. You are coming to work for Ghana and not yourself.”

Top on the list of objectives of the Nana Akufo-Addo administration is to get the Ghanaian economy moving again.

“The Ghanaian economy has been on a nose dive for the last five years and low growth, widespread unemployment, huge debts that’s the reality of our situation in Ghana and especially the unemployment amongst the youth has reached alarming proportions and if we don’t find a method of dealing with it, our country and society are going to run into all kinds of problems along the line,” he noted.