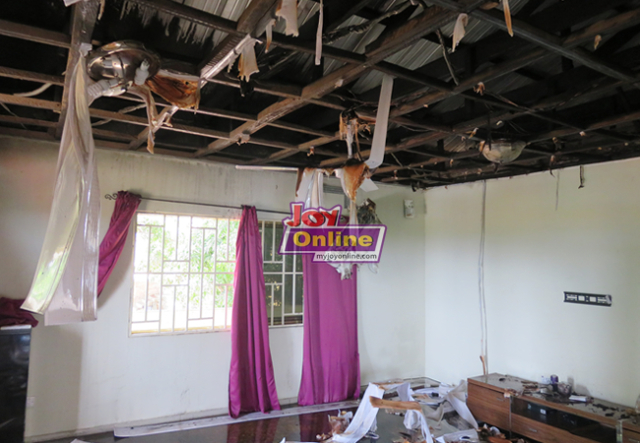 This follows a fire that destroyed a three-bedroom apartment in Dzowulu in Accra, Monday afternoon.

The cause of the fire is yet to be ascertained, but the officials of the GNFS who were there to put out the blaze said the plastic T&J used for the ceiling facilitated the spread of the fire to the other apartments.

According to Joy News' Manasseh Awuni who was at the scene, the fire was raging out of the three apartments on the first floor of the one-story building.

Residents said about 12 pm, the occupant of the apartment where the fire started was at a nearby house when she was alerted that there was smoke coming out of her apartment.

According to the victim's elder brother, she lost everything that was in her room; all her clothes in the bedroom, and everything in the kitchen. He said they were able to pull out only a flat screen television and some furniture.

Narrating what happened, he said they noticed smoke coming out from his sister's bedroom and they rushed in only to realise there was a fire in the ceiling.

Manasseh said after the fire was doused and he entered to look at the extent of damage, he realised the other two apartments with concrete roofing had minimal damages.

T&J according to the GNFS officials contains petrol carbons, which makes the fire spread faster making her lose everything.