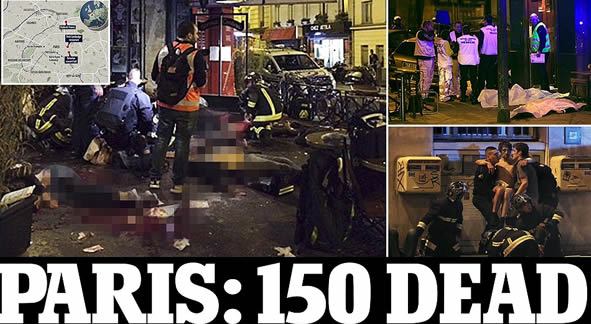 One of the seven attackers who killed 129 people and wounded 350 in Paris has been identified, as the French police investigation picks up pace.

The attacker was named as Omar Ismail Mostefai, a 29-year-old French citizen of Algerian origin. Six people close to him were reportedly taken into custody on Saturday morning.

Police also say they have found a black Seat car they suspect was used to attack two restaurants.

France is in three days of mourning.

A special service for the families of the victims and survivors will be held at Paris's Notre Dame Cathedral later on Sunday.

Friday's attacks, claimed by Islamic State (IS) militants, hit a concert hall, a major stadium, restaurants and bars in the French capital.

Prime Minister Manuel Valls has said France will continue with air strikes against IS in Syria, and described the group as a very well-organised enemy.

President Francois Hollande has cancelled his plans to attend the G20 in Turkey and is holding meetings with various political leaders to discuss the crisis.

Mostefai was reportedly identified after investigators found a severed finger at the scene of the worst atrocity, the Bataclan concert hall where more than 80 people died.

He came from the town of Courcouronnes, 25km (15 miles) south of Paris. He lived in the nearby town of Chartres until 2012, according to the local MP and deputy mayor Jean-Pierre Gorges.

He is said to have regularly attended the mosque in Luce, close to Chartres.

According to reports, Mostefai had a history of petty crime but was never jailed. The security services deemed him to have been radicalised in 2010 but he was never implicated in a counter-terrorism investigation.

Police are said to be trying to find out whether he travelled to Syria in 2014.

His father, brother and sister-in-law are among six people close to Mostefai who have reportedly been taken into police custody.

"It's crazy, insane. I was in Paris myself last night, I saw what a mess it was," Mostefai's older brother told AFP before being detained after voluntarily attending a police station on Saturday.

Mostefai's brother said he had not had contact with him for several years following family disputes, but said he was surprised to hear he had been radicalised.

He was one of six children in the family and had travelled to Algeria with his family and young daughter, the brother said.

Meanwhile, a black Seat car which investigators suspect was used by gunmen who opened fire at people in restaurants has been found in the eastern suburb of Montreuil, police say.

The investigation is also focusing on a possible link to Belgium after police there arrested three men near the French border.

A black Volkswagen Polo with Belgian registration found at the Bataclan had been rented by a Frenchman living in Belgium, the Paris chief prosecutor said.

The French national was identified while driving another vehicle in a spot check by police on Saturday morning as he crossed into Belgium with two passengers.

The BBC's Hugh Schofield in Paris says investigators are working on the theory that these three may be another team of attackers who managed to flee the scene.

Speaking in Paris, chief prosecutor Francois Molins told reporters: "We can say at this stage of the investigation there were probably three co-ordinated teams of terrorists behind this barbaric act.

"We have to find out where they came from… and how they were financed."

A Syrian passport, found near the body of one of the attackers at the Stade de France, had been used to travel through the Greek island of Leros last month, Greek officials have confirmed.

French President Francois Hollande has imposed a state of emergency after the worst peacetime attack in France since World War Two. It is also the deadliest in Europe since the 2004 Madrid bombings.

Islamic State said it carried out the attacks on "carefully chosen targets" and were a response to France's involvement in the air strikes on IS militants in Syria and Iraq.

President Hollande said France had been "attacked in a cowardly shameful and violent way" and vowed to be "merciless" in its response to IS militants.