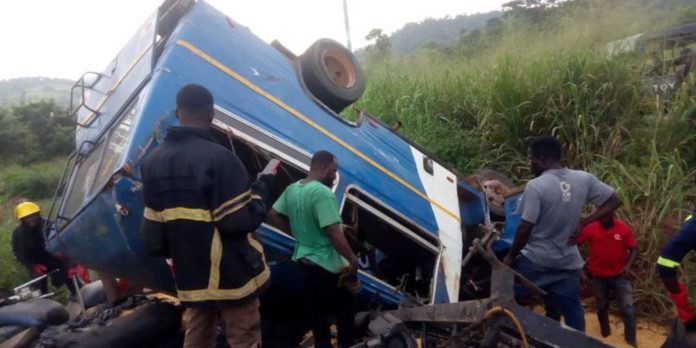 Five persons have been reported dead in a gory accident along Begoro- Osiem road in the Eastern Region.

The accident involved a Benz bus with the registration number GE 4075–E overloaded with bags of maize and charcoal.

It had a few passengers on board from Donkorkrom en route to Akim Agogo.

The accident is said to have occurred at about 3:30 pm on Tuesday while the vehicle was negotiating a sharp curve near Akrumusu village.

The driver failed his brakes, lost control of the steering wheel and the bus veered off the road and somersaulted multiple times before landing in a ditch.

Five persons were stuck and buried in the vehicle by the loaded charcoal and maize.

He said the driver, Solomon Owusu and another, 46-year-old Kofi Boateng were rescued and rushed to the Begoro District Hospital.

The other five were removed and rushed to the Begoro District Hospital but were pronounced dead on arrival.

The bodies have since been deposited at the same hospital’s morgue for preservation and autopsy.