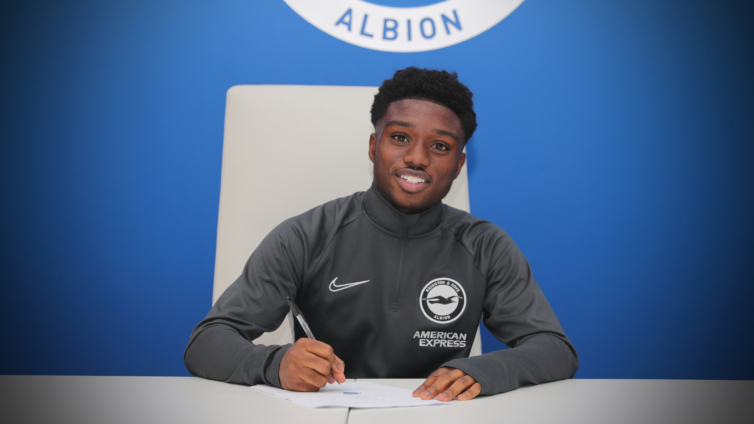 It has been an emotional year for Brighton and Hove Albion new boy Tariq Lamptey. From coming on as a substitute for Chelsea against Arsenal in what was his Premier League debut to starting his first ever Premier League game with Brighton.

On Tuesday evening, Lamptey was given the nod ahead of Montoya and Schelotto in a crucial Premier League game against third-placed Leicester City.

The 19-year-old impressed throughout, with bursting runs forward as well as remaining resolute at the back. Lamptey shared his experience after his first start for Brighton. In his words:

“I think I did well, I just want to say thank you to the gaffer and to the team because they helped me a lot. I worked hard for this moment, so hopefully, it can be the first of many.”

Tariq Lamptey said after the Leicester vs Brighton match

Grateful but ambitious, Lamptey has had to work hard and climb the ladder of recognition in the football fraternity.

A graduate of the Chelsea academy, Lamptey’s fast rise is one that has attracted genuine interest from Ghanaians. The right-back was born to Ghanaian parents in London and hence, could feature for the Black Stars.

However, how well do you know Tariq Lamptey? Here are five interesting facts about the former Chelsea player.

Tariq Lamptey was born on 30th September 2000 to Ghanaian parents. His Ghanaian family origin is traced to Northern Ghana.

Lamptey, who is the second child, grew up alongside his three siblings who were all male.

He didn’t have the privilege of growing up in a wealthy home. His dad and mom were average working-class people in London.

After Roman Abramovich acquired Chelsea in 2003, most families in London pledged their support for the Blues and Lamptey’s family were inclusive.

Growing up, every member of his family adored Michael Essien – who shared a similar Ghanaian origin. The love for Essien endorsed the family’s affinity for Chelsea and with Tariq loving football more than any other sporting activity, the Chelsea Academy was the perfect destination.

Standing at 5’4 (1.70 meters) in terms of height, Lamptey’s diminutive stature has been a standout feature about him.

One that makes him easily identifiable, however, the Brighton defender believes that his lack of height is complemented by his immense technical abilities.

On first sight, Lamptey seems to be blessed with blistering pace coupled with a low center of gravity and dribbling ability.

These technical abilities suggest why he is more inclined to going forward as a full back. In 86 matches across Chelsea’s youth teams Lamptey scored five goals with 12 assists.

However, Graham Potter seems to be working on his defensive side. With the defender spending more time in his own half according to the heatmap of the game against Leicester.

His defensive work rate was also highlighted in his tackling numbers as his three successful tackles was the joint most by any player in the match.

The biggest controversy so far in Lamptey’s budding career has to do with his Chelsea departure. A move that raised the eyebrows of most Chelsea fans considering how the right-back had impressed in his debut game against Arsenal.

Lamptey’s first words after that Arsenal match hinted an ambitious player who was ready for more responsibility in his career: “I’ve waited a long time for this”.

A deeper interpretation looks beyond the fact that he had been at the Chelsea Academy since age 7. His words painted a picture in a professional sense, knowing deep down that he was ready for a bigger challenge – which is regular football.

His reason for leaving his boyhood club was well documented in his first words as a Brighton player. He said:

“It was a really tough decision to leave as I’ve been at Chelsea since the age of seven and seen it all the way to the under-23s, and then the first team. It was a proud moment when I made my Premier League debut, but I felt that it was the right time to start a new chapter and come to this brilliant club.”

Away from club football, one potential controversy could be which national team Lamptey chooses to represent.

Currently, he plays for under-20 side of England after making over 12 appearances for the under-18 and under-19 sides.

Being born to Ghanaian parents and yet to make a senior appearance for the Three Lions in a competitive game, Lamptey could be persuaded to play for Ghana.

Despite being young, he faces stiff competition for the right back spot in the England senior team. In his way; Trent, Walker, Wan-Bissaka and Trippier.

Will he abandon England after playing for their youth sides or will he make a u-turn and play for Ghana – the homeland of his parents?

Despite enjoying over 6,000 minutes of football with Chelsea’s youth teams, Lamptey’s first team minutes were rather scarce.

However, his debut against Arsenal put him in the Blues’ history books as he became the fifth player aged 21 or under to make their Premier League debut for Chelsea this season.

Lamptey, who joined Brighton from Chelsea for £3m last January, was handed his first start and the 19-year-old showed tremendous courage against a Leicester team flying high in third place.

The British-Ghanaian became the first teenager to feature in a Premier League game for two different clubs in one season since Harry Kane in 2012-13.

The future looks bright for Lamptey at Brighton as head coach Potter was full of praise for the teenager after the Leicester game.

“Tariq Lamptey is a top boy,” said Potter who fielded Brighton’s youngest ever team in the Premier League with an average age of 25. “He made his debut and carried on with a massive cut.

“He was outstanding, a great character and good on the ball. He has a big future ahead of him. He has pace, is strong on the ball and will get better.”

Tariq Lamptey, still a teenager enjoys his youthful days as he spends most of his time off the pitch with his PlayStation.

Due to his proper upbringing, Lamptey doesn’t flaunt his earnings through exotic cars, mansions etc.

A humble player who just loves to play football, Lamptey even when on holidays prefers a simple look.

Maybe his fashion sense might become more exquisite as his profile as a footballer rises but for now, he loves to keep it simple.

In present day football, tattoo culture has become very popular among young footballers but Tariq Lamptey at the moment is tattoo-free with no inks on his upper or lower body.