Five people have been killed by a storm in Cape Town that South African media dubbed "the mother of all storms".

Schools and universities have had to shut, roofs were blown off and shelters have been opened for those left destitute.

The storm comes at the end of the region's worst drought in a century.

The BBC's Mo Allie in Cape Town reports that before the storm, there had been several interfaith prayer group meetings praying for rain. 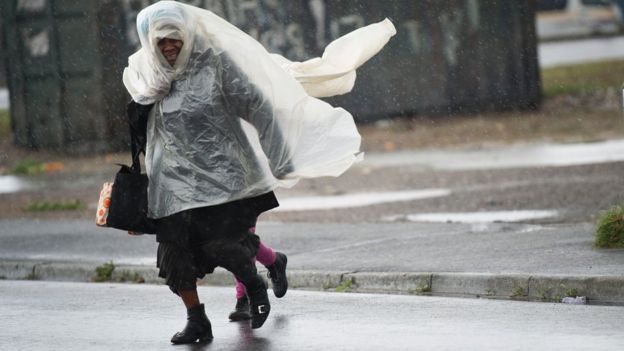 Our correspondent adds that the storm was anticipated and warnings have been made by the local authorities for the last week.

Among the dead is a family of four killed in a fire started by lightning, said Western Cape Disaster Management spokesman James-Brent Styan.

He added that many people had been injured by flying debris.

BBC weather forecaster Philip Avery warns that Wednesday could bring in excess of 50mm of rain to some western areas of South Africa, accompanied by winds of 60-90km/h.

Coastal areas face the additional hazard of high tides, reinforced by storm waves, some of which may reach 10m.

Thursday should see conditions easing but a passing cold front will introduce much cooler weather in all areas.

In May, the Western Cape province declared a drought disaster after two reservoirs were already completely dry.

Southern African nations are reeling from a two-year drought.

The UN estimates that over 40 million people have been affected by the drought that was caused by the El Nino climate phenomenon.