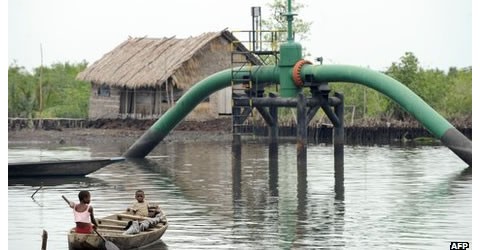 Russian and Estonian sailors abducted from a French-owned ship off Nigeria’s coast last month have been freed, a Nigerian military spokesman has said.

The spokesman said the military helped free the six Russians and one Estonian captured by gunmen on 12 October.

There has been a spate of attacks on cargo ships off the West African coast in recent months, often for ransom.

In a statement, Bourbon said the sailors appeared to be in good health.

It would not give details about the “context” in which the crew was released or what the kidnappers’ demands were, the company said.

The Nigerian military’s Joint Task Force (JTF) spokesman, Col Onyema Nwachukwu, told the AFP news agency that troops from the unit were involved in securing the release of the crew.

“Of course JTF operatives were involved by combing the nooks and crannies of the Niger Delta to ensure that the hostages were released unhurt. But we will not comment on ransom or any operational details,” he said.

The kidnappings happened on 15 October on the ship, Bourbon Liberty 249, near the Niger Delta, the heart of Africa’s biggest oil and gas industry.

Another nine people on the vessel managed to sail away.

Bourbon has been targeted by pirates in Nigeria before. In 2010, three French crewmen were kidnapped off a Bourbon-operated ship in an oilfield in the Niger Delta.

The hostages were later released.

The trade in stolen oil has fuelled violence and corruption in the Niger Delta.

Although attacks in the region have declined since a 2009 amnesty for militants, piracy is on the rise in parts of West Africa.

In the first six months of this year, the International Maritime Bureau has recorded 17 pirate attacks in Nigerian waters – a significant increase on 2011.

Last month, a Greek tanker carrying 32,000 tonnes of petrol went missing with a crew of 24 on its way to the port of Abidjan in the Ivory Coast.

In August, pirates attacked a Greek tanker off the coast of Togo, stealing 3,000 tonnes of fuel.