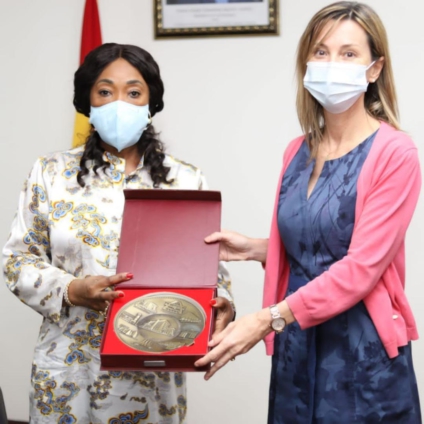 Madam Pulgar began her tenure as the Spanish Ambassador to Ghana in 2017.

She is a career diplomat and previously served as the technical advisor in the cabinet of the Minister for Foreign Affairs in 1993 as well as a Deputy Director-General of the Foreign Ministry in 2008.

During the meeting in Accra, the Minister congratulated Madam Pulgar for a successful tour of duty in Ghana.

Madam Ayorkor Botchwey acknowledged the fact that Ghana and Spain had enjoyed and shared warm, friendly and wide-ranging bilateral relations dating back to the 1960s, which had expanded over the years into several areas including health, education, trade, water and sanitation, construction, support to the security sector, energy and fishing.

She applauded the outgoing Spanish Ambassador for her highly distinguished work in Ghana, which had elevated the cordial relations between Ghana and Spain to a higher pedestal exemplified by the exchange of high-level visits including the two-day working visit of the President to Spain in March 2021 to participate in the launch of Spain’s Action plan dubbed; “Focus Africa 2023”.

She also cited the two-day official visit to Ghana of Madam Cristina Gallach Figures, Deputy Minister for Foreign Affairs, European Union and Cooperation of the Kingdom of Spain.

The Minister highlighted some notable achievements of the Ambassador during her tour of duty in Ghana such as Spain’s enhanced cooperation with Ghanaian security authorities and her interventions leading to the construction of an ultra-modern ICT centre in Tamale, capacity building programmes for civil servants and donations of vehicles and IT equipment to equip the security services of Ghana.

Madam Ayorkor Botchwey also applauded the outgoing Ambassador for facilitating the visit of the Spanish trade mission that visited Ghana in November 2019 for the Spain-Ghana Chamber of Commerce event.

She noted that one of the high points of the outgoing Ambassador’s tenure was the revival of the Spanish Year Abroad Programme to enable more Ghanaian students to benefit from linguistic immersion in institutions of higher learning in Spain.

She urged the outgoing Spanish Ambassador to be an advocate for Ghana and promote Government’s flagship programmes abroad, particularly, the “One-District, One-Factory”, “One-Village, One Dam” and the “Planting for Food and Jobs” to attract technical and financial support from Spain for the full realization of the flagship programmes.

She encouraged the outgoing Spanish Ambassador to promote Ghana as a tourism destination and add that Ghana was open and willing to cooperate and learn from Spain since they had a very vibrant and thriving tourism sector, equipped with the latest logistics, technical know-how and efficient services.

The Minister affirmed that Ghana remained strongly committed to promoting friendly and cooperative relations with Spain and expressed the hope that even after completion of her duty tour in Ghana, she would continue to be a close friend of Ghana and further support the enhancement of the relationship between the two countries.

On her part, Madam Pulgar, who said during her tenure the cordial relationship between the two countries had developed, also called for further strengthening of the ties.