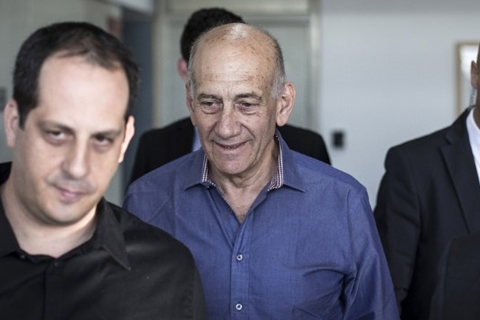 Former Prime Minister Ehud Olmert was sentenced Tuesday to six years in prison for taking bribes while mayor of Jerusalem.

Olmert was convicted in March of receiving about $161,000 in bribes related to a controversial Jerusalem housing project called Holyland. The judge acquitted Olmert on a third count of bribery.

The developer of Holyland, Hillel Cherney, had been previously convicted of bribing Olmert and other high-level officials in exchange for Holyland approvals.

Olmert, an attorney who in 1973 became the youngest person ever elected to Israel's parliament, the Knesset, served as prime minister from 2006 to 2009.

He announced his resignation shortly after police recommended corruption charges against him.

In August 2012, he was convicted of breach of trust and acquitted on two corruption-related charges after a trial that lasted nearly three years. He was given a 3-month suspended jail sentenced and fined about $19,000 in that case.

The allegations stemmed from Olmert's time as mayor as well as prime minister. Prosecutors accused him of double-billing government agencies for travel, taking cash from an American businessman in exchange for official favors and acting on behalf of his former law partner's clients.