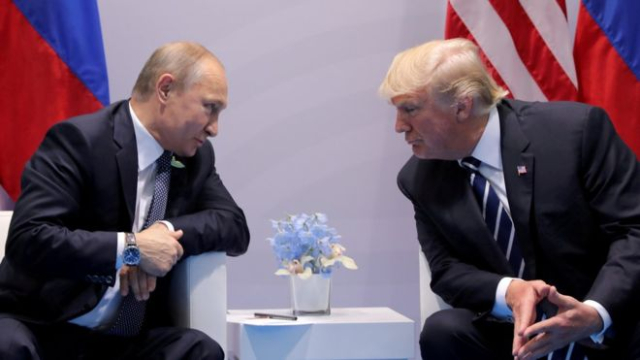 The White House has insisted it believes Russia still poses a threat to the US amid confusion over comments made by President Donald Trump.

Mr Trump appeared to disagree with US intelligence when he responded "no" to a question about whether Russia was still targeting American elections.

It comes amid a flurry of criticism over his recent comments about Russia.

"The president and his administration are working very hard to make sure that Russia is unable to meddle in our elections as they have done in the past," Mrs Sanders said at a news briefing on Wednesday.

After he shook his head and replied, "Thank you very much, no", she again asked: "No? You don't believe that to be the case?"

He appeared to respond again: "No".

But Mrs Sanders rejected that interpretation later in a news briefing, telling reporters the White House was taking action to prevent any future meddling.

"We wouldn't actually spend as much time and effort as we are if we didn't believe that [Russia is] still looking at us," she said.

Later, Ms Vega tweeted that the president had been looking directly at her when he answered.