From Eric’s Diary: In defence of Agyeman-Manu, a word to the public office holder – Part II 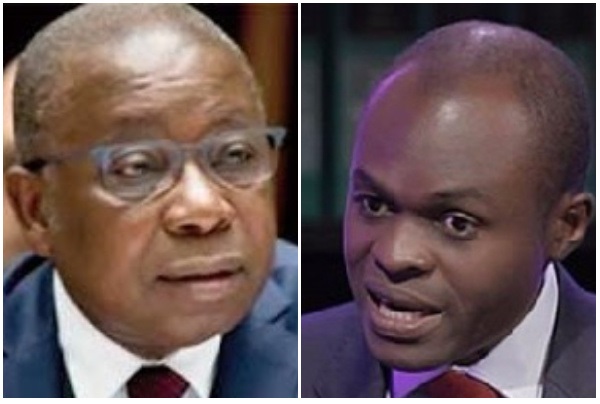 In Part I, I recalled how Ghanaian politicians use the Machiavellian tactics to get people to do what they want, no matter the consequences. I also started my defence for Mr. Agyeman-Manu, elaborated on his offence and ended with this paragraph:

However, instead of applauding this out of the box thinking leadership style, his employers, led by the Minority in Parliament, with Lawyer Martin Kpebu in tow, are calling for his head- resign or be fired.

That’s because, in addition to the legal breaches referred to in Part I, he told the ad hoc Parliamentary Committee tasked to probe the transaction that, “to the best of my knowledge, we have not done any payment as yet”, contrary to the Committee’s findings. They also refer to this, “ …I couldn’t think properly’.

Please, under crisis situations, no good leader thinks properly- desperate situations call for desperate measures, forgotten? What is key is that your actions should not make things worse. It is only on hind sight that you get the chance to review your actions and learn the lessons.

But Mr. Agyeman-Manu’s detractors will not appreciate his efforts. The new charge is perjury- lying under oath. The sense of equivocation in, “to the best of my knowledge, we have not done any payment as yet”, seems lost on them. “He lied under oath”, they stressed.

Not even news that the $2million overpaid, has been refunded, could assuage them. Especially, Mr. Martin Kpebu.

Watching and listening from afar, he seems and sounds as though he has a personal score to settle, and a huge bone to pick with the Minister of Health. ‘Like the Man(u) snatch him chick bi’. Ah?

The Private Legal practitioner spared no opportunity on any of the Multimedia platforms he is offered, for a discussion on this issue, to jab the Man(u)

Mr. Kpebu would have realized this long before Saturday, August, 14, if he had not been blinded by his emotions. When I heard him, I soliloquized thus, “see how long it took you to realise that Mr Agyeman-Manu could not have taken this decision without President Akufo-Addo’s consent. It’s all because you were being emotional about the issue.”

Conveniently, in re-echoing snippets of Mr Agyeman-Manu’s appearance before the Committee, this one, “I intended to seek parliamentary approval later”, is lost on all his critics. A clear case of ‘selective amnesia’, credit Abdul Malik Kweku Baako.

Owing to my experience working in the Public Sector, I could glean, ab initio, that the Man(u) had suffered the Machiavellian tactic. “Let’s get the vaccine, no matter the cost, people are dying, the end justifies the means”, he must have been directed by the President.

Mr. Martin Amidu, former Special Prosecutor, a Public Servant through and through, saw through it too, “Ghanaians must be hallucinating to think that the Minister of Health, whom I have known since our Commonwealth Hall days in the 1970s, would have had the temerity to have executed the Sputnik Covid-19 procurement contract without executive approval by the Mother of the Government,” he noted.

And because Mr. Agyeman-Manu’s conscience is clear, and he knows his boss got his back, the Man(u)  faced the ad hoc Committee with confidence.

Indeed, the fact, that the Committee was constituted and made to undertake that public hearing, was a huge surprise to me. Here too, I saw the end, from the beginning.

No wonder the REAL Boss, President Akufo-Addo has made mockery of the calls for him to sack the Man(u). “Agyeman-Manu has really suffered in that Health Ministry and is still suffering, the people are slapping him”, President Akufo-Addo said, while laughing together with dignitaries and others gathered at a durbar with Chief of the Bono region.” That is how myjoyonline.com reported the story.

Still, Mr Kpebu will not give in to his demand for the Man(u)’s head. “The reaction of the President at that place is not an indication that Mr Agyeman-Manu will not be sacked or resign. How on earth was the President going to stand there, and embarrass him and say ‘yes Mr Agyeman-Manu you did all of these things wrong’?” he quizzed in an interview on Joy 99.7 FM.

I am told your name, Kpebu means ‘lost stone’ in Ewe. Clearly, Mr Agyeman-Manu did not lose the stone (our money). So let’s forgive him.

Ofori-Atta the partner in crime

And ooh, I am intrigued by the fact that, apart from his ‘partner in crime’, Minister of Finance, Mr. Ken Ofori-Atta, the only person who seem to be, ‘talking some’, for Mr Agyeman-Manu, is Deputy Majority Leader, Hon. Alexander Afenyo-Markin.

All other Ministers are looking on unconcerned, forgetting that, today it is him, tomorrow, it could be you, as our elders say.

“To be so unsympathetic to somebody who felt that what can he do to ensure that there is continuity for Ghanaians, and now sit comfortably to chastise him without empathizing with him; I am empathetic of him, and I expect that others will also realize the type of pressure that he was under at the time and his commitment to ensuring that Ghanaians are safe,” Mr. Ofori-Atta said in solidarity during an interview with the Norwegian Journalist who broke the story.

My favourite part of his statement, “I got a number of interviews by a lot of European media outlets, and I asked them; you sit there and ask me why I am paying more for vaccines when you are hoarding those vaccines, and I have one out of a hundred people being vaccinated whereas you have eighty over a hundred, and then you sit there and ask me why are you doing this?”

Afenyo-Markin vs three others

The face to face encounter between two protagonists that I yearned for in the Ejura probe, but did not get, happened on Joy News’ News File on Saturday, August 14, but the subject was different- Sputnik V vaccine probe it was.

Hosted by Private Legal Practitioner and Journalist, Samson Lardi Anyenini, News File is one of the flagship programmes of The Multimedia Group.The tagline for the programme is ‘News File, where we put Ghana first’.

On Saturdays, between 9:00am and Midday, the whole world listens to this talk show. Even competitor media organisations monitor and produce news stories out of the discussions.

So, when you are made a newsmaker by a major news outlet like The Multimedia Group, the tendency is for you to assume an all knowing posture.

It takes a face to face on News File, which has the ears of the powers that be and the most discerning listeners, for you to realise that the law is in the mind of the beholder.

The many recalls and scenario questions seemed to have dazed Afenyo-Markin. His thoughts were beginning to lose their usual sharpness as Samson continued the barrage of questions. Afenyo-Markin was fighting a lost battle, it seemed.

Then he found a ‘lacuna’ in a legal argument made by Lawyer Kpebu. “Counsel, you know I respect you and you also respect me. Don’t be emotional, quote the law,” is what it took to quieten Mr Kpebu.

I am concluding this piece on Wednesday, August, 18, I have not heard Martin again on this subject since August, 14.

Martin, please let the end justify the means. I say so because laws are made for men and not the other way around. After all, who made the law, is it not man?

Any wonder that two lawyers will differ on what almost every law says? At the end of the day, it is the lawyer who is lucky enough to have the judge on his side, who is right.

A case in point is that your colleague Private Legal Practitioner, Thaddeus Sory has described as, “over the bar”, a decision of the Supreme Court. This is in reference to a case involving Bank of Ghana and the Association of Finance Houses. The law is in the bosom of the judge, you guys say.

Senior Journalist, Kwesi Pratt Jnr., has a favourite Twi proverb, ‘woo wye efuo nsaa, na wa hw3 wodi3’- when you are chewing the monkey’s hand, check if it’s not yours, because they look alike. We are in this country. God will grant us life. Mr Kpebu should not do anything wrong.

Those who have forgotten about their ‘chinchinga’ and pampers debacles, thus have mounted the moral high horse and are shouting themselves hoarse, are the ones who have kept my mouth wide open.

A word to the public servant

From what has been said so far, it is discernible that the Politician will do whatever it takes to get what s/he wants.

As I have alluded to earlier, when working with the politician, there are instances where, for a particular situation, the only way out, is for one to break the law. Yet, a politician will tell you, ‘go and do something about it’.

When you are confronted with such orders, directives or instructions, your best advisor should be your conscience.

In our part of the world, resignations are not common. Resign? Na k) di di3n? Even retirement is a headache, then you say resign.

Thus, when confronted with a situation where your conscience is not agreeing with the only option available, don’t do it. You will not be fired. The worst case scenario is a transfer.

Here, your salary is guaranteed. You may lose a few privileges and amenities in the process though. But you will be fine. Trust me.

I dare say that today, Vice President Mahamudu Bawumia, in his heart of hearts, will admit, that when they went round the country in 2016 and 2020, asking for the mandate to govern Ghana, this economy is not what they bargained for.

That’s a lesson for the #AgyemanManuMustGo campaigners, “before you criticise a man, walk a mile in his shoes.

Therefore, spare Agyeman-Manu. If and only if, his Mens rea was for public good.

For, “to err is human, to forgive, is divine”- Alexander Pope.

If you insist, then you have to DEAL with the REAL Boss, ‘the Mother of the Government’, President Nana Addo Dankwa Akufo-Addo.

Let God Lead. Follow Him directly, not through any human.