At least 15 people have been killed and 160 wounded in an Israeli strike that hit a fruit and vegetable market near Gaza City, Palestinian officials say.

The explosion hit a busy market in Shejaiya, where hundreds of people were shopping, a spokesman for the Gaza health ministry said.

The attack came during a four-hour truce called by the Israeli military – rejected by Hamas as meaningless.

Palestinian doctors said another Israeli air strike after the truce was announced had killed seven people in Khan Younis. 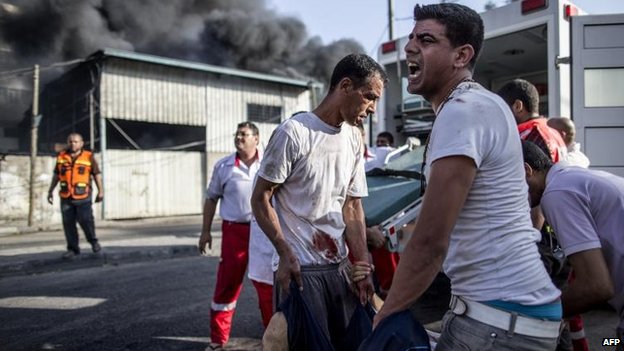 Earlier, the UN said Israel had attacked a UN-run school housing refugees in Gaza, despite warnings that civilians were there. Fifteen people were killed and dozens hurt.

The Israel Defense Forces (IDF) reported on Wednesday that three more Israeli soldiers had been killed in fighting in Gaza.

More than 1,300 Palestinians and 58 Israelis have now died in the conflict. Most of the Palestinian deaths have been civilians.

Fifty-six Israeli soldiers have been killed along with two civilians. A Thai worker in Israel has also died.

Correspondents say it was unclear whether anyone in Gaza was aware that the partial ceasefire had been called.

Witnesses at the scene spoke of smoke billowing over the site, with ambulances racing victims to hospital.

A journalist who worked for a local news agency was reported killed.

However, it had warned that the truce would only apply to areas where Israeli soldiers were not currently operating, and it told residents not to return to areas they had previously been asked to evacuate.

"The lull which Israel announced is media exploitation and has no value because it excludes the volatile areas along the border, and we won't be able to get the wounded out from those areas," he said in a statement.

Sirens continued to sound in southern Israel after the ceasefire, to warn of militant rocket attacks.

Israel launched its offensive in Gaza after a surge in rocket fire from the territory.

Hamas says it will not stop fighting until the blockade, maintained by both Israel and Egypt, is lifted.

The current conflict, now in its 23rd day, is the longest between Israel and militants from Gaza.