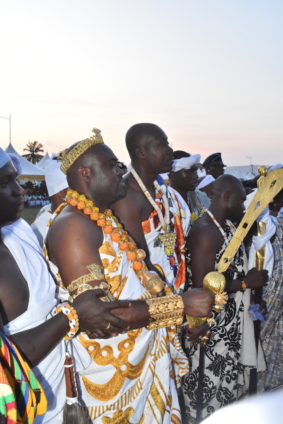 The kingmakers of the Gbi Traditional Area in the Hohoe Municipality of the Volta Region have installed Seth Kojo Agbesinyale as the Togbega Gabusu VII.

The Investment Officer succeeds the late Togbega Gabusu VI, who reigned for 29 years, contributing to the development of the area and the chieftaincy institution in the region.

The colourful coronation which saw the display of indigenous African culture took place at the municipal capital, Hohoe.

The ceremony took off with Togbega Gabusu mounting the palanquin and embarking on a procession through the principal streets of Hohoe.

Led by horsemen, warriors of the Gbi State, Kingmakers, among others, he danced to the admiration of his people who cheered him and wished him well on the throne.

He displayed a Holy Bible at a point during the procession.

He also held a signage which read “Ɖeka Wɔwɔ!!! Gbi Nenyo Daa!!!” which translates to “Unity for a prosperous Gbi”.

In his inaugural address, Togbega Gabusu VII eulogised his predecessor on his commitment to harnessing development in the area, and promised to build on his strides.

He outlined unity, job creation, tourism, physical and human development, and promoting environmental hygiene and good sanitation as thematic areas he would focus on during his reign as leader of the Gbi State.

He therefore called on Gbi sons and daughters living in the diaspora to invest in the area to create jobs to propel economic growth, listing agribusiness as a lucrative venture to invest in.

“Mr. Chairman, I sincerely acknowledge the work currently being done by the Save Dayi Project to re-forest the banks of the river. I call on all to lend a hand and support this noble undertaking. The Traditional Council will liaise with the MCE to provide employment opportunities for our youth as in government programmes such as the Youth-Start policy programme, and other youth entrepreneurship programmes in order to create jobs”, he detailed.

The Minister of Railways Development, John Peter Amewu, who spoke on behalf of President Akufo-Addo, entreated the Gbi Traditional Area to rally behind Togbega Gabusu VII for the common good of the area.

He indicated that dark clouds of economic hardship hovering over Ghana would soon clear, urging the gathering to keep hopes alive in the Akufo-Addo-led-government.

Togbega Gabusu VII who holds a Master in Business Administration (MBA) from the University of Sunderland, UK is a Senior Investment Officer with the Ghana Integrated Iron and Steel Development Corporation.

His work and education took him to countries such as the United Kingdom, Belgium, Holland, France and the United Arab Emirates.

He is married with three children and is a devoted Christian.

DISCLAIMER: The Views, Comments, Opinions, Contributions and Statements made by Readers and Contributors on this platform do not necessarily represent the views or policy of Multimedia Group Limited.
Tags:
Gbi Traditional Area
Hohoe
Togbega Gabusu VII
Volta Region