Germany has handed back the human remains of indigenous people killed during a genocide in colonial Namibia more than 100 years ago.

A Namibian government delegation received the skulls at a church service in the capital, Berlin.

The bones had been sent to Germany for now-discredited research to prove the racial superiority of white Europeans.

Tens of thousands of Herero and Nama people were murdered in response to an anti-colonial uprising. 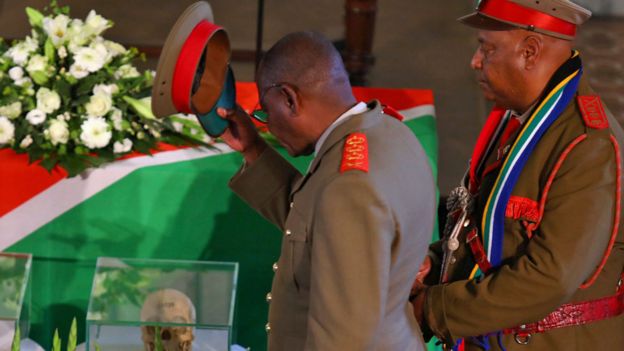 Photo: Members of the Namibian delegation paid their respects during the ceremony

Their descendants are still waiting for an apology from the German government.

Why was an extermination order issued?

The genocide began in 1904 after a Herero and Nama rebellion in response to the German expropriation of their land and cattle.

The head of the military administration in what was then known as German South West Africa, Lothar von Trotha, issued an extermination order in October 1904.

The Herero and Nama were forced into the desert and any who were found trying to return to their land were either killed or put into concentration camps.

There is no agreed figure of how many died but some estimates have put it as high as 100,000. 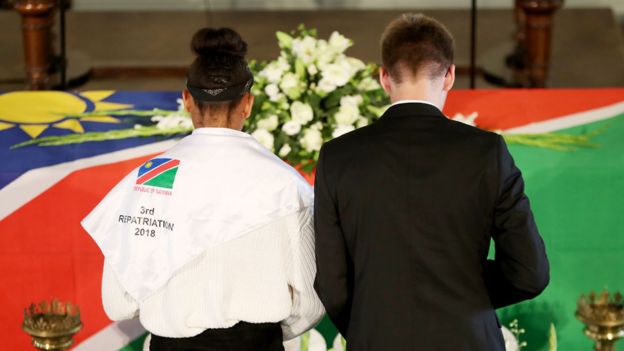 Photo:  It was an emotional service at the church in Berlin

It is thought that 75% of the Herero population and half of the Nama population died.

The skulls of some of the victims were sent to Germany where racial anthropologists studied them as part of an attempt to justify a theory about the superiority of Europeans.

There are thought to be hundreds of Namibian skulls in Germany and on Wednesday more than 25 remains were handed back.

Skulls from Germany's other African colonies, including modern-day Cameroon, Tanzania, Rwanda and Togo, were also used in the discredited studies.

In 2016, Germany said it was prepared to apologise in principle but it is still negotiating with the Namibian government over the form of the apology and how to deal with the legacy of the genocide.

Some of them have launched a class-action lawsuit against Germany in New York, hoping to get reparations.

Germany has argued that it has given Namibia millions of dollars in development aid to support all people in the country.

Wednesday's ceremony is the third time that remains have been handed back to Namibia, but it was hoped that this time it would be part of a true reconciliation process, reports the BBC's, Johannes Dell. 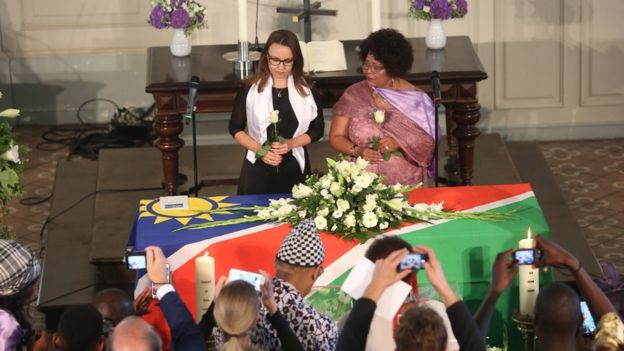 The church service included government officials from both countries 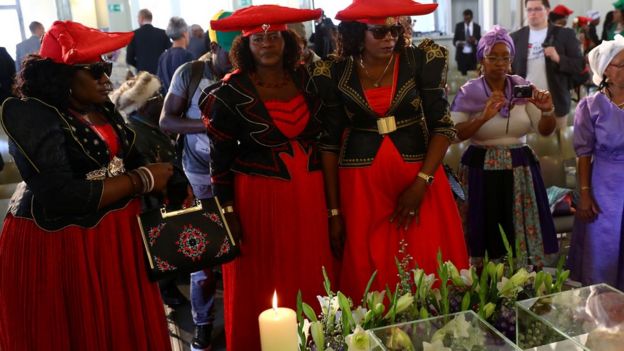 But descendants of the victims are angry that there has been no apology and no agreement of reparations. They are also unhappy that they are not part of the negotiations.

"Our two governments… are still negotiating on an appropriate text for an apology. That's a big joke. These guys are just playing when Rome is burning," Herero paramount chief Vekuii Rukoro told the service in Berlin.