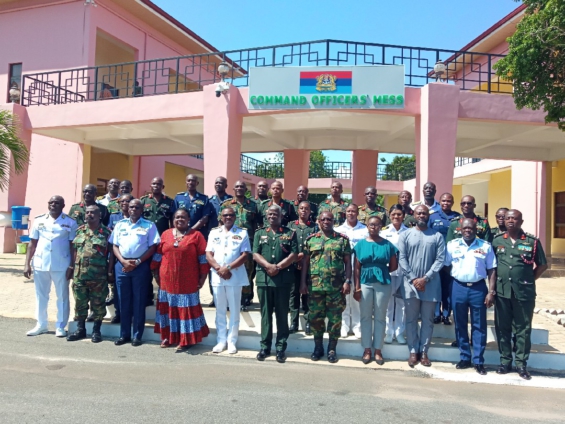 The Chief of Defence Staff (CDS) has revealed that Ghana remains one of the few troop-contributing countries to deploy between 13-15 per of females in United Nations Peacekeeping Missions around the world.

“In this regard, we are obliged by the UN Security Council Resolution 1325 to ensure women’s participation in decision making, peacekeeping and peacebuilding,” he said.

Lt Gen. Akwa said this in his address at a High-Level Gender Conference on the theme: “Generating Equal Opportunities in the Ghana Armed Forces (GAF),” attended by high ranking officers of the Armed Forces.

As recent as August 28, this year, the UN Security Council adopted Resolution 2538, which highlights the need to promote the full, effective and meaningful participation of uniformed and civilian women in Peacekeeping operations at all levels and in all positions including senior leadership positions.

The CDS noted that Ghana was among one of the few countries globally to have started enlisting females as far back as 1958 – barely a year into her independence.

“Additionally, unprecedented in our history, we have seen an increase in the intake of women to approximately 17 per cent,” he said.

“And not only have the numbers increased but also, we continue to see them employed in ever expanding roles.”

He said for the first time, the GAF had two female Generals – Brigadier Generals Constance Edjeani-Afenu and Felicia Twum Barima.

“We have also recently (2018) commissioned five female officers into the infantry corps.”

Lt Gen Akwa said in the ranks, a good number of females were employed in trades or capacities initially preserved for men, such as colour ensigns and related colour escorts, physical training instructors, attending drill and duties courses and some as sergeant majors or service equivalents.

The Command gave all necessary support to female officers to celebrate their 60th Anniversary in a grand style, he said.

“In talking about female appointments and their achievements, I cannot leave out our first-ever and in fact, my first ever Gender Policy Advisor, Commander Veronica Adzo Arhin, who has worked tirelessly since her appointment to establish her office and extend gender desks to all units,” the CDS said.

He praised Commander Arhin for being the brain behind the organisation of the maiden GAF High-Level Gender Conference.

He said the seminar was not only timely but very important for them as major decision makers.

“We need to ramp up our dedication and efforts on this all-important global subject. I humbly entreat us all to genuinely embrace the concept to ensure the GAF is in tune with global trends for change,” he said.

“Enhanced gender mainstreaming today is not just right for the day, but also a better Armed Forces for tomorrow and all times.”

Commander Veronica Adzo Arhin, on her part, said the establishment of her office was currently underway and that subsequently, a comprehensive gender policy would be promulgated for the GAF.

“The GAF needs to do some mainstreaming, promotion, and appointment of females in senior management positions to align itself with gender equality.”