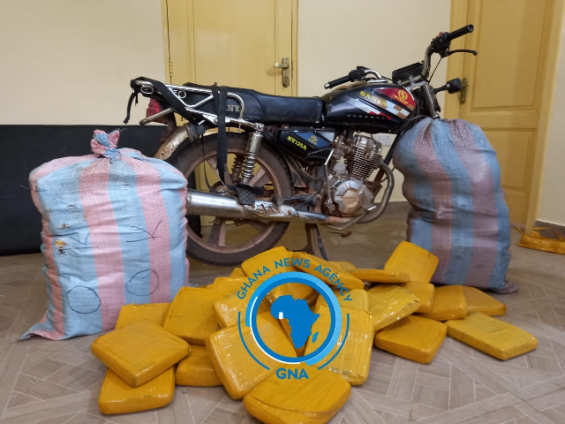 The parcels, which were intercepted at Gbi-Godenu in the Hohoe Municipality were being transported on a “SANYA” branded black motorbike which had no number plate.

Deputy Superintendent Odoi Jeffery Nii Laryea, Commander of the Border Post, who spoke to the Ghana News Agency said the suspect upon identifying the officers, abandoned the goods and fled into the nearby bush.

He said the officers were on an assignment when they spotted the rider of the motorbike.

The parcels have “G3” and “G5” inscriptions on them whilst the sack in which they were packed had “O K” written on it.

Same officers in July 2021, intercepted 607 parcels of suspected Indian hemp heading to Togo at Wli Todzi which also had inscriptions.

The Commander said looking at the packaging of the earlier parcels and the current one, it was believed to be coming from the Gbi-Godenu area but meant for different recipients.

He advised the public to desist from carrying or dealing in narcotics and illegal substances.

A Driver and Vehicle Licensing Authority (DVLA) sticker found on the motorbike revealed the registration number as M-20-VR 4076.

The motorbike and the parcels were handed over to the Narcotic Control Commission for further investigations.