Ghana Navy positioning to combat insecurity within Gulf of Guinea 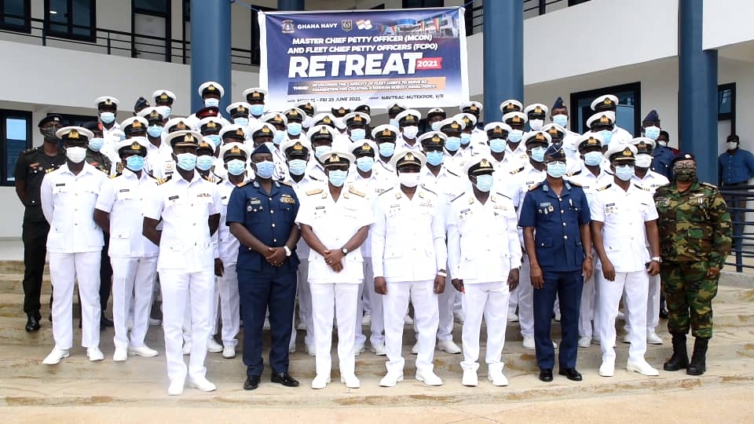 The Ghana Navy of the Ghana Armed Forces has begun positioning itself to ensure sanctity in Ghana’s territorial waters.

Officers who were adored with new ranks introduced at the middle management level in the Ghana Navy took part in the four-day retreat at the Naval Training Command, Nutekpo for Master Fleet Chief Petty Officers.

The retreat would prepare the officers for supervision and management of the lower levels ranks.

The Master Chief of the Navy, Master Chief Petty Officer (MCPO) Mishiame Gilbert Komla indicated that the training becomes imperative following the promotion of the officers to Fleet Cheifs, who would be in charge of training the human capacity of the Navy.

“This retreat is our maiden edition and one of its kind in the Armed Forces. It’s put up specially to develop the capacity of the Fleet Chiefs so that they can handle their functions at their level,” he said.

Chief of the Naval Staff, Rear Admiral Issah Adam Yakubu, expressed optimism the retreat would complement efforts by the government to modernize the Navy force.

He explained that the officers are being trained to enable them to operate modern Naval equipment that the government would soon purchase for the branch of the Armed Forces.

“I can assure you that in the next few months, we are going to step up our surveillance and vigilance based on this capacity that we are building, and we are going to nib this canker [insecurity within the Gulf of Guinea] in the bud”, he detailed.

The Naval Command promised similar capacity-building programmes for other ranks in the branch in the coming months.