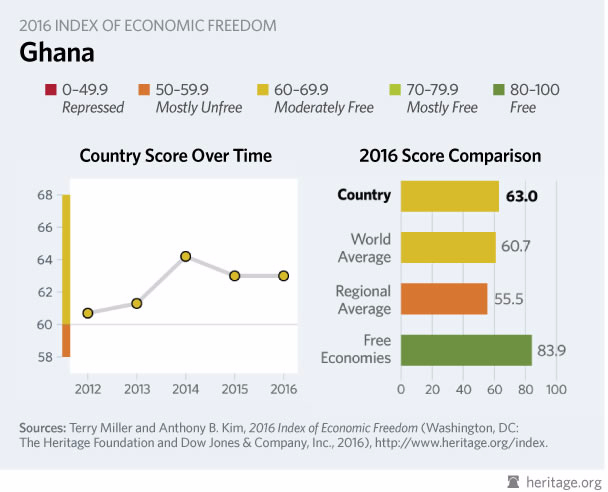 Ghana has placed 72nd in the 2016 economic freedom index. This was revealed in a presentation by James Roberts, a research fellow at the Heritage Foundation, Washington DC.

Speaking at the forum on the index organised by the IEA, Mr Roberts said Ghana has dropped 22points on the corruption score since 1995 despite recording 2.3 increase in overall score since 2012.

Under rule of law Ghana recorded a 2.0 increase on freedom from corruption.

The Economic Freedom Index seeks to assess the extent to which countries have absolute right of property ownership, fully realized movement for labour, capital and goods and absence and absence of constraints of economic liberty.

Ghana's performance on some factors

On the factor of Rule of Law, the report says political corruption persists despite the existence of robust legal and institutional frameworks to combat it, active media coverage, and the government’s willingness to investigate major scandals.

The scarcity of resources compromises and delays the judicial process, and poorly paid judges can be tempted by bribes. The process for getting clear title to land is often difficult, complicated, and lengthy, the report noted.

On Limited Government, the report indicates that the top personal income and corporate tax rates are 25 percent. Other taxes include a value-added tax, a national health insurance levy, and a capital gains tax.

Despite ongoing efforts to modernize the labor code, much of the labor force works in the informal economy, the report states.

In accordance with its three-year IMF extended credit facility, the government committed to removing all remaining fuel subsidies in 2015.

New foreign investment must be registered with the government. The financial sector has undergone privatization, but banking is undercapitalized, and access to financing remains limited.