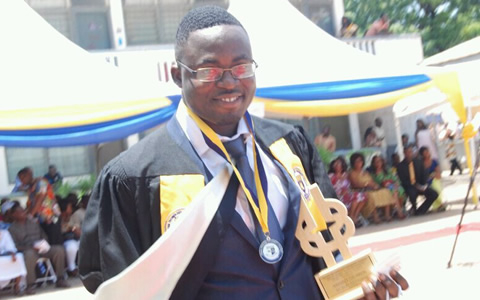 Mr Osei-Owusu, who is a PhD Teaching Assistant at the Technology University was accorded the Overall Best Student for a Master in Telecommunication Management.

Speaking to journalists after the ceremony, Mr Osei-Owusu said he is determined to do even better in his PhD in ICT —  which is ongoing — in order to be beneficial to the country's development in that discipline.

Alex Osei-Owusu completed his first cycle education at Assin Fosu, with an aggregate 6 in the Basic Education Certificate Examination (BECE) and continued at Opoku Ware Secondary School in Kumasi.

While in the university, he exhibited leadership qualities which eventually earned him the postion of Hall President at  UCC.

His quest for knowledge in computer science brought him the Ghana Technology Univeristy College after graduating from UCC to pursue an MSc in Telecommunications Management..

Mr Osei-Owusu says he has been inspired by Dr Robert Barfour, Vice President of Ghana Technology University as well as family and friends.