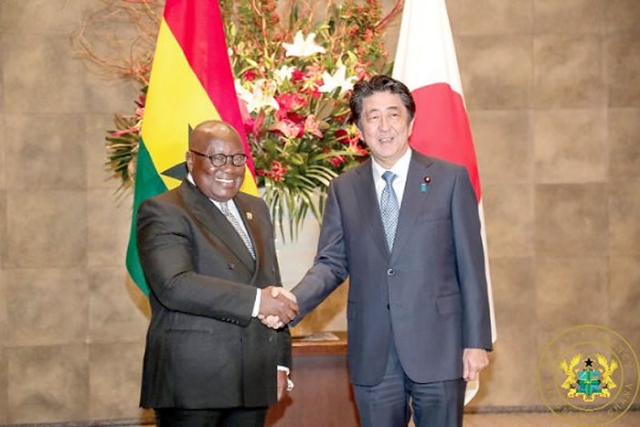 President Nana Addo Dankwa Akufo-Addo says Ghana has decided to turn its back on the old economy which has been dependent on aid and the production and export of raw materials.

“We want to emulate the story of the East Asian Miracle which saw, from 1965 to 1990, the 23 countries of East Asia, especially Japan, growing faster than all the regions in the world.

“Japan made the transition from poverty to prosperity, as we are attempting to do, by restructuring the institutions of its governance, modernising its agriculture to enhance its productivity, implementing a clear industrial policy and rationalising the financial sector to support growth in agriculture and manufacturing and industry,” he said.

President Akufo-Addo said this at a joint press conference he held with the Japanese Prime Minister, Mr Shinzo Abe, in Tokyo, Japan yesterday.

President Akufo-Addo said Ghana-Japan relations dated back to 1927 when Dr Hideyo Noguchi arrived in the then Gold Coast to conduct research into yellow fever which laid the foundation for the great friendship between the two countries.

“I have, with great pleasure, conveyed to Prime Minister Abe the news of the recent renaming of the street in front of the Japanese Embassy in Accra as the ‘Dr Hideyo Noguchi Street’, in memory of that illustrious son of Japan and in appreciation of the continued generosity of the good people of Japan to Ghana.

“This is in addition to the Noguchi Memorial Institute for Medical Research located in the University of Ghana, Legon, Accra,” he said.

The President also expressed special gratitude to Prime Minister Abe and Japan for their continued assistance to various sectors of the Ghanaian economy through initiatives and programmes under the African Business Education (ABE) initiative, the Overseas Development Assistance Scheme, the Japan International Cooperation Agency (JICA) and the Japanese Overseas Cooperation Volunteers (JPVC), particularly in the areas of improving maternal and child health care, transportation, energy, agriculture and human resource development.

With discussions centring on boosting further political and economic relations, cultural and people-to-people exchanges and cooperation at the multilateral level, the two leaders also touched on the need to promote a better world and address global issues relating to the Sustainable Development Goals (SDGs) and women empowerment.

“We also underscored the importance of the Tokyo International Conference on African Development (TICAD) process as an open, inclusive and transparent partnership forum.

With the assurances I have received on the preparations so far, there is no doubt in my mind that TICAD VII will open a new chapter of trade between Japan and Africa,” he added.

President Akufo-Addo said Ghana was endowed with abundant natural resources which the government was seeking to use as the basis to transform the economy from the current reliance on the export of raw materials into a value-adding one, with the vision of taking Ghana out of dependence on aid to a self-reliant economy beyond aid.

“I am pleased to state that Prime Minister Abe pledged Japan’s support for this transformative agenda.

In that regard, we have noted with satisfaction the value that the Ghana-Japan Investment Forum scheduled to be held tomorrow in the JETRO Hall will add to our investment initiatives,” he added.

The President was confident that the meeting with Prime Minister Abe had further “boosted the steadfast cooperation between us and Ghana will continue to collaborate with Japan at all levels, particularly towards the peaceful resolution of conflicts and in the search for global peace and security to promote sustainable development around the globe”.