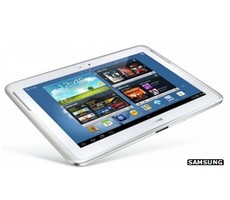 A 28-year-old Ghanaian, Derrick Addae, CEO of GIL Corporation from Kwabre-Aboaso in the Ashanti region has invented a pocket PC tablet which can compete with most of the known tablets on the international market like Apple’s IPad and Samsung’s Galaxy tablet.

Addae’s invention is called ‘G’ Slab and is capable of making phone calls, it has wi-fi and Bluetooth and built-in Microsoft word with which one can upload any document from USB stick or Dongle.

The ‘G’ Slab has a memory of 8GB and it can support additional memory of 64 GB and can take as many Apps as any other tablet.

The ‘G’ Slab was launched in London by the Ghana’s High Commissioner to the United Kingdom and the Republic of Ireland, Prof. Kweku Danso-Boafo at the offices of the Ghana Mission on Friday, October 18, 2013.

Launching the G Slab, Prof. Kweku Danso-Boafo congratulated Addae for his invention and noted that it took the Western world so many years to build computers and get to where they are today but he is hopeful that with people like Addae, Africa would soon be having its own computer giants too.

The launch was attended by the Ghanaian Community, staff of the Ghana High Commission and staff of GIL Corporation.