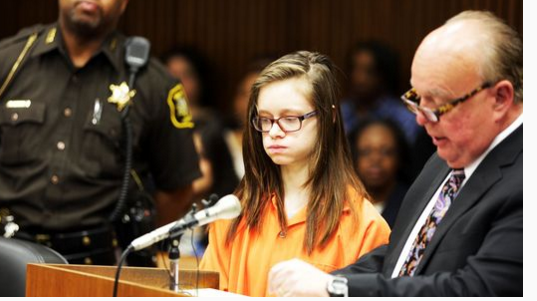 At an age when most kids are thinking about graduating from high school and heading to college, Roksana Sikorski only has prison to look forward to for the next 10 to 20 years of her life.

While her former classmates in the Plymouth Canton (Mich.) school district are enjoying spring break this week, the waifish 17-year-old sat trembling in a chair in the middle of a Wayne County courtroom Monday, handcuffed and attired in an orange jail jumpsuit, waiting to hear the judge pronounce his sentence.

Sikorski was only 15 in October 2014 when she plotted with an adult boyfriend to kill her family inside their Plymouth Township, Mich., home in what the county prosecutor called a “truly haunting” plan.

She got a fish fillet knife, sneaked into her 12-year-old brother’s room, put her hand over his mouth and put a knife to his throat. As he reacted, the knife cut deep into his flesh.

The boy screamed, alerting the rest of the family. Sikorski dropped the knife and fled outside where her then 23-year-old boyfriend – who police say had been texting her instructions on how to carry out the killings – was waiting. They were soon arrested.

Despite being the target of the plot, Laurene and Jeff Sikorski have stood firmly behind their daughter from the start, even hiring an attorney to represent her. They said the teen – who stands 4-foot-8 and weighs 95 pounds – suffered from depression and was manipulated by her older boyfriend.

Sikorski’s parents adopted her and two siblings from Poland more than a decade ago after the children endured an abusive early childhood. They say her codefendant, Michael Rivera, now 24, coerced her into the conspiracy, and they blame law enforcement for not arresting him sooner after he had illegal sex with her.

“She is still fragile, and an adult prison would shatter her delicate world. How will sentencing her as an adult help her? Is this justice?”

Roksana Sikorski took a plea deal Feb. 22 to one count of assault with intent to murder in exchange for six other felony counts getting dropped. Rivera is serving a life sentence after being convicted by a jury on all seven counts.

Sikorski tearfully apologized to her family Monday “for not being the daughter they wished I would be. And I promise that I will get better, no matter what happens.”

Circuit Judge James Callahan said this is a case of a young person “swayed by an older person,” who previously had victimized her with “inappropriate sexual behavior.” He said that given the investigation’s findings, she may have had second thoughts, as the injury sustained by her brother appears to have been “more of his being aroused … from her initial action” than from her cutting into him.

“This is truly an unfortunate situation,” Callahan said, as he sentenced her to 10 to 20 years in prison.

In a separate case, which occurred more than two months before the knife incident, Rivera was sentenced to 2 ½-15 years in prison for having sex with Sikorski when she was 15.

Sikorski’s parents have questioned why it took 11 weeks between the sex incident and police receiving the warrant for Rivera’s arrest.

“Where were the police, where was (Wayne County Prosecutor) Kym Worthy’s office when Rivera was running around my neighborhood for three months?” Jeff Sikorski said after the sentencing. “This wouldn’t have happened if they had picked him up earlier. It was their incompetence that caused all this.”

The parents also said they oppose the Wayne County Prosecutor’s Office’s decision to charge the girl as an adult. Her confession was kept out of trial after Callahan found that she was too immature to waive her Miranda rights.

Worthy’s office opposed that decision, but the appeals court ruled with Callahan.

“The prosecutor had the discretion to look at the facts and the background of the defendant and the very serious nature of the offense to determine that she should be charged as an adult in this matter,” prosecutor’s spokeswoman Maria Miller said after sentencing Monday.

Matthew Evans, Roksana Sikorski’s attorney, said he hopes this case leads to the laws being reconsidered.

“The problem that we had here is that the juvenile laws in the state of Michigan give the prosecutor tremendous latitude in who they charge,” he said, adding that in this situation, it would be more appropriate for the judge to decide whether to charge his client as an adult.

The parents said they opposed the plea, and they questioned why Evans waited until the day trial was supposed to start Feb. 22 to accept the plea agreement with prosecutors.

Sikorski and Rivera were both charged with four counts of conspiracy to commit murder and one count of assault with intent to murder, using a computer to commit a crime and assault with a dangerous weapon, all felonies. Rivera was convicted last year on all counts. His attorney, Wright Blake, has said that his client maintains his innocence in the conspiracy-to-murder case and will appeal his life sentence.

Evans said he’d recommend Sikorski appeal that she had ineffective assistance of counsel. He was appointed after Callahan removed attorney Leslie Posner from the case. The parents had hired Posner, but Callahan found that there was a conflict of interest, as they were identified as victims in the case, and removed her.

The parents, meanwhile, continue to raise the two younger siblings in hopes of giving them a bright future.

“I would never trust the legal system, frankly, to protect my family again,” Jeff Sikorski said.