Give 20% contracts to disabled – Cobbler appeals 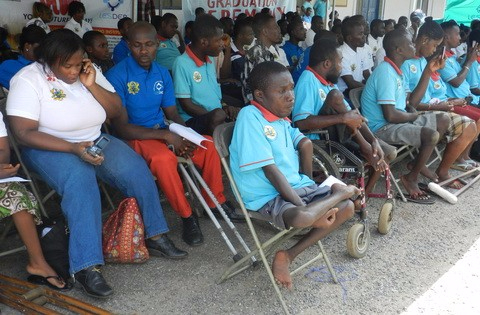 President of More Hope for Disabled Foundation, an NGO in Accra, Joseph Odey Mensah, is calling on government to urgently introduce a policy that would automatically devote at least 20% of some contracts to Persons with Disabilities (PWDs).

Mr Odey Mensah, a qualified cobbler or shoemaker as it is widely known, mentioned some of the suitable contract categories as sewing of school uniforms, manufacturing of pupils’ shoes, school desks, among others as the ones that would help transform lives for PWDs.

“We have many tailors, shoemakers and others among us, who can perfectly execute government contracts like school uniforms, shoes and many others that we are trained in.

“We want government to reserve some 20% or even more of such contracts to us and we can assure the nation of perfect execution. We are challenging government to give it a try and see if we wouldn’t make a mark and change the fortunes of many of our brothers and sisters parading the streets begging,” he challenged government.

Some PWDs are unhappy with the system in the country that they say, has no proper consideration for them when it comes to the equitable distribution of contracts and employment opportunities.

The lack of deliberate programmes and projects for PWDs is considered a factor leading to begging on the street and complete dependency on others, with its attendant social problems.

Mr Odey is, therefore, appealing to government to put in place policies that would motivate, keep them off the streets and give them hope in life.

He lamented how jobs such as toll collection and less-strenuous works are given to ‘able-bodied’ persons, relegating PWDs to struggling for few remaining opportunities.

“We have acquired various vocations with the hope that government would come to our aid by giving us opportunities but unfortunately we are left to struggle for contracts and other openings with those who are better-placed,” he observed.

He added that, “If our efforts cannot be complemented by the state, then we are not being treated fairly.”

He reminded the President, Nana Akufo-Addo of his inaugural speech where he stated that a state that doesn’t create opportunities for the less-privileged is not worth its status.

“Our father [President Akufo Addo] must remember his words and do something for us as his legacy. As for the [District Assemblies] Common Fund, it isn’t enough to really empower us to live a more meaningful life,” he appealed.

DISCLAIMER: The Views, Comments, Opinions, Contributions and Statements made by Readers and Contributors on this platform do not necessarily represent the views or policy of Multimedia Group Limited.
Tags:
More Hope for Disabled Foundation
PWDs