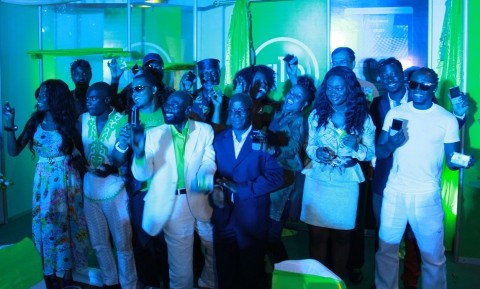 Glo Mobile Ghana has presented its brand ambassadors with Blackberry Porsche and Nokia E7 phones, special SIM cards, airtime, and contract extensions, as it fetes them at a sumptuous lunch in Accra.

Ghanaian celebrities as well as other VIP guests thronged the 5 star Labadi Beach Hotel to witness the plush event, which the company held in honor of its brand ambassadors made up of the finest from the music, film, and sports industries.

In his address, Head of Business for GLO Mobile Ghana, Patrick Awotwi re-emphasized the company’s commitment to supporting the development of the entertainment and sports industry.

“GLO is an empowerment platform. As we continue to empower our subscribers to succeed in their businesses and family lives by providing them with cutting edge telecommunications facilities, so shall we continue to empower our ambassadors to grow from strength to strength. We are Africans. If we don’t celebrate and inspire our icons and ambassadors who have all made us proud, nobody will celebrate them for us,” he said.

He stressed that the stance taken by the company was evident in the sponsorship of the GLO Premier League to the tune of US$3.5 million; the Ghana National Football Teams, as well as the ongoing biggest soccer reality TV show in Africa, the GLO Soccer Academy Dream Team, which is currently in its final screening stages in Accra.

Awotwi attributed the telecom giant’s accelerated and unprecedented performance, of gaining 7% of Ghana’s telecom market share within five months of its launch, to the massive support given to it by the generality of Ghanaians, the media at large, its dealers, as well as its invaluable ambassadors.

At the spectacular event, which was a perfect blend of entertainment, music, and razzmatazz, the brand ambassadors each received brand new BlackBerry Porsche phones, Nokia E7 handsets, customized phone numbers, free airtime, as well as contract extensions for their roles as brand ambassadors.

The awed ambassadors were taken by surprise at the unveiling of the various packages.

Reggie Rockstone, who spoke on behalf of the ambassadors, expressed his profound gratitude to the Chairman of GLOBACOM, Dr. Mike Adenuga Jr, for his strides in Africa, and his vision to preserve their legacy in the arts by identifying and recognizing the importance of their roles in the lives of Ghanaians and Africans at large.