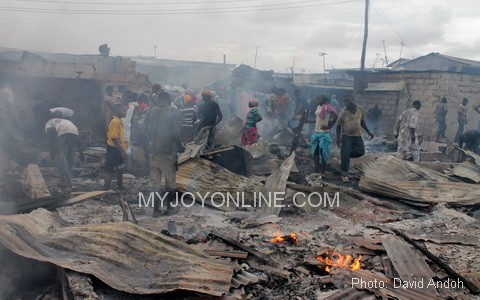 According to Public Relations Officer of the GNFS, Prince Billy Anaglatey, many of the recent fire outbreaks could have been averted if the recommendations were implemented.

Mr. Anaglatey said even though the Service is doing its best to move away from fighting fire to preventing its occurrence, the Assemblies are not doing much to complement their efforts.

"We have made recommendations which if implemented, would have averted some of these outbreaks but the Assemblies have failed to do their part," Mr. Anaglatey said on the Joy FM Super Morning Show, Friday.

He noted that personnel from the Service are regularly sent out to educate the public on fire safety as part of measures adopted to curb the frequency of the outbreaks.

Meanwhile, the GNFS is yet to receive a copy of the report on investigations by the Amerian experts on the recent market fires. Although the Fire Service assisted the Americans in conducting the investigations, the PRO said "it is difficult to tell where their report is".

Deputy Interior Minister, James Agalga last week told Joy News: “We received the report not too long ago,” but could not readily tell the date the report was received; he was however certain it came in “about weeks” ago.

He said experts from the ministry are studying the report before forwarding it to the President with “certain recommendations for implementation”.

The Konkomba market in Accra is the latest to suffer fire outbreak when several shops were razed on Thursday. One person was reported dead as a result.