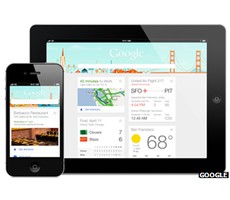 The Google Now service is being extended to Apple’s iPhones and iPads.

Until now the product – which suggests “answers before you ask” – had been limited to devices running Google’s own Android operating system.

Unlike the original version, Google Now only works within the firm’s Search app on Apple’s iOS platform – potentially limiting its appeal.

One analyst suggested the launch indicated that the firm’s priority was securing the widest audience possible.

“Google is going to put its technologies onto other platforms whenever it can draw people into its services,” said Brain Blau, consumer technology research director at the consultants Gartner.

“They do want to entice people to buy Android devices, but they know not everybody’s going to, and they still want to deliver their services – especially for people who are already using their products on iOS.”

iOS powered 29% of smartphones sold in Great Britain between December and February, according to fresh data from market research firm Kantar Worldpanel. It said Android accounted for a further 58% of the market.

Siri rival
Google Now works by offering “cards” filled with information designed to be useful to a smart device user without them needing to type in a search request.

It works by accessing the machine’s location data, and analysing the contents of the person’s Gmail and Google Calendar records as well as their past Google searches.

Examples of the results given include:

*Flight departure updates based on bookings made earlier, details of which are saved in the person’s email account

*Suggested nearby restaurants, museums and shops

Google Now can bring up driving direction advice in its iOS Search app
Those worried about privacy issues can restrict which information is stored and used.

The cards are accessed by swiping up the bottom section of the Google Search app’s screen, and the user can then scroll through a selection of the various categories generated.

The facility could potentially draw users away from using Apple’s own personalised search tool, Siri, which relies on users instigating a request.

However, the fact that it involves more screen presses to access Google’s information could discourage some from using it.

“The big difference is that Google Now isn’t limited to the search product when used on Android – it’s connected to the OS [operating system],” said Mr Blau, referring to the fact that the Android version can be activated by a single button press and be set to bring up high-priority card alerts when the app is not open.

“So there’s a big user interface difference and they may have different usage patterns and interaction paradigms because of that.”

Prompts
A comparison chart posted online by Google also shows that the iOS version of Google Now only offers 21 of the 29 types of cards available on Android.

Missing categories include Nearby Events which brings up concerts and other shows; Research Topic which offers web page suggestions based on earlier searches; and Fandango which reminds a user when they need to leave home to arrive at a cinema in time for a pre-booked show and then brings up their electronic ticket when they arrive.

Several tech sites, including Cnet and The Next Web, have reported that the search firm might next bring the Google Now service to its Chrome browser and possibly its search webpage based on analysis of changes to the firm’s code.

More will be revealed when the company hosts its annual Google I/O developers conference in San Francisco between 15 and 17 May.