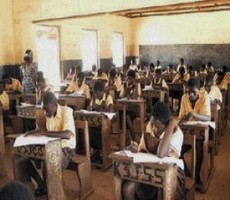 Students, who qualified to senior high school but could not get admission, will receive tuition at home, thanks to an open school programme to be enrolled by the government in conjunction with a Chinese technology giant, Huawei.

Education officials say out of the over 90 percent of students who qualified for SHS this year, just about 56 percent got admission.

That means, about 115,000 qualified students could not get admission into senior high school this year. This is because there are not enough classrooms and residential facilities.

Minister of Education, Lee Ocran told JOY News’s Seth Kwame Boateng that the government is therefore introducing the virtual school system, similar to the open schools system abroad, to get these students occupied until they get admission.

With the new system, he explained, students can now sit in the comfort of their “bedroom and create a school”.

“It would be called Centre for Electronic Distance Learning and Open Schools. We are doing that with Huawei, so that those who don’t get admission into second cycle schools can still study.”

Mr Ocran also announced that government is planning to build in the next four years, four non-residential schools that would take 1000 students each.