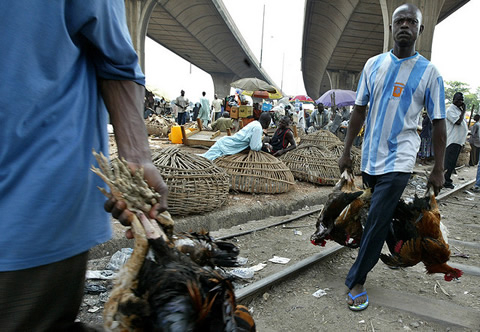 Government has paid È»1.1 million compensation to 25 poultry farmers whose farms were affected by an outbreak of bird flu this year.

The poultry farms of beneficiaries from the Ashanti, Western, Greater Accra, and Central regions, were de­stroyed as a result of the outbreak in July.

Speaking at the presentation in Accra yesterday, the Minister of Food and Agriculture, Mr. Fiifi Kwetey said the payment of the compensation was part of efforts to support those whose birds were killed.

He noted that the payment was made to cover not only live birds but also poultry feed and eggs destroyed by veterinary staff during the out­break.

According to him, a total number of 44,144 birds and eggs were de­stroyed as part of measures to miti­gate the spread.

Mr. Kwetey said his outfit was aware that the outbreak had affect­ed the farmers financially, morally and socially, but was hopeful that the compensation would help them re­cover from the shock.

"Sentinel birds will be placed on the various affected farms that had their birds destroyed to assure the farmers that their farms were free from the disease and therefore could start production again, Mr. Kwetey said.

The minister said government had taken some steps to prevent a recur­rence of bird flu which included the sensitisation of the public to the dis­ease, workshop for poultry famers and security agencies, while engaging bird dealers to support the farmers.

'Mr. Kwetey commended the Food and Agriculture Organisation (FAO) of the United Nations (UN) and the United States (US) Embassy, for their consistent and financial support in the prevention and control of the dis­ease in the country.

The farmers who were highly elat­ed by the gesture commended gov­ernment for the support and called on other corporate bodies to come to their aid.