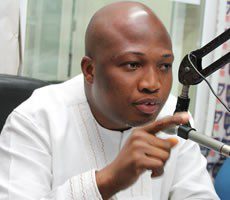 Government is “vehemently” rejecting a corruption report that has ranked Ghana’s education sector as the third most corrupt education systems in the world.

Speaking to Joy News, Deputy Minister for Education, Samuel Okudzeto Ablakwa described the report as an attempt to “tarnish the country’s image”.

The 2013 Global Corruption Barometer Report on Education was released Tuesday by the local chapter of Transparency International, Ghana Integrity Initiative.

It mentions that 40% of parents pay illegal fees for education against a global corruption average of 18%.

With 40%, Ghana clinched top spot in a league table of 24 countries with a corrupt system of education. Ghana unenviably beat countries such as Nigeria, Pakistan, Afghanistan, Papua New Guinea and Romania.

Ghana also scored fourth out of five levels of corruption with 66% of Ghanaians believing the education system is corrupt or highly corrupt.

The 2013 Global Corruption Barometer Report on Education points out that teacher absenteeism is also linked to corruption.

But Deputy Minister of Education Samuel Okudzeto is unenthused by the report saying it is full of generalisation and is “not convincing enough”. He said the research methodology is also unclear.

He said the report does not define what constitutes corruption and wonders how teacher absenteeism, appointment of teachers, plagiarism and private tuition could be described as corruption.

He explained that teachers are not appointed in Ghana but are absorbed into the educational system by the Ghana Education Service after they complete a College of Education.

The minister asked rhetorically who you could bribe in view of the computerization which eliminates the human factor, which used to be a potential source of corruption.

He said the report does not appreciate the differences in education systems among countries.

But Vitus Azeem the Executive Director of the Ghana Integrity Initiative defended the report insisting it is “very close to the reality”.
He said the report confirms the endemic culture of corruption in public institutions.