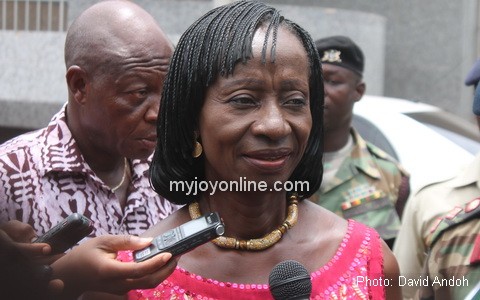 Government has suspended plans to construct new district hospitals across the country, Health Minister has announced.

The government in the 2013 budget announced it was going to build district hospitals nationwide as part of efforts to improve upon health delivery in the country.

However, according to sector minister Ms. Sherry Ayittey, her outfit received the directive from the Ministry of Finance indicating that all such projects should be put on hold until further notice.

Joy News gathers that the decision is to enable government prioritize its projects as well as settle debts incurred by state owned enterprises.

Addressing Parliament on Thursday, Ms. Sherry Ayittey stated as a result of the new directive, communities hoping to benefit from construction of the facilities through private public collaboration, would have to wait for some time.

"Currently we have received a letter from the Ministry of Finance that all such programmes should be put on hold…I believe that the district assemblies can also support the Ministry with their common funds," the Minister told the House.

She added however that government is still committed to its policy to provide every district with the hospital. The suspension is just to allow government prioritise its activities.

Meanwhile, Solomon Namliit Boar, Member of Parliament for Bunkpurugu Yunyoo, one of the communities in the Northern Region said to benefit from the construction of facilities, is worried about the directive to defer the project.

He told Joy News' parliamentary correspondent Elton John Brobbey, many pregnant women have died because there are no health facilities around to take care of the the sick and pregnant women.

The MP said, women in labour have had to be carried in pickup vehicles 70 kilometres to Nalerugu, the nearest healthcare facility.

He maintained the Bukpurugu Yunyoo District Assembly for instance, is not in the position to fund the construction of a hospital as suggested by the minister because, "the Assembly's internally generated revenue is almost zero".