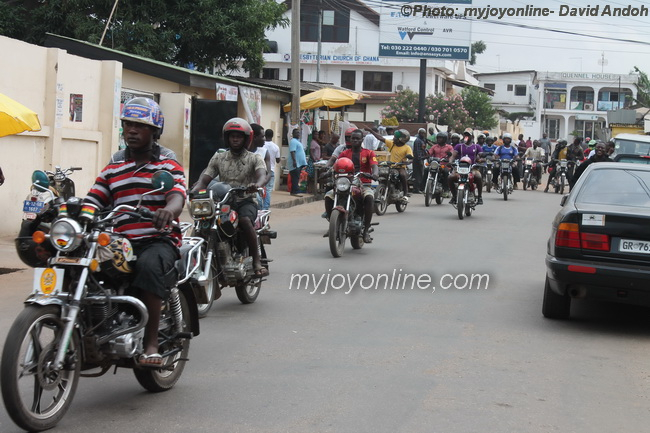 The Director of Research for the Motor Traffic and Transport Department (MTTD) at the Ghana Police Service has revealed that government will introduce a policy designed to regulate the usage of commercial motorcycles also known as ‘okada’ and motor tricycles which are also known as ‘aboboyaa’.

DSP Superintendent Alexander Obeng said the state commissioned a consultation that involved all Ghanaians across the country in 2019 to kickstart the process.

“The state commissioned the Ministry of Transport and [it] has done a study. The report is yet to be made public,” he told Daniel Dadzie, host Joy FM’s Super Morning Show.

The country has witnessed a staggering increase in the number of accident cases involving commercial motors and tricycles.

For instance, from January to October 2019, the National Road Safety Commission had recorded 589 deaths through motorcycle accidents, a figure that increased by the end of the year.

Mr David Osafo Adonteng, the Director, Planning and Programme, the Commission said the figures had been increasing since 2010, which recorded 310 deaths.

To reduce the rate of accidents and casualties caused by the commercial motor riders, the Ghana Medical Association (GMA) has called for a total ban of their operations.

Dr Frederick Kwarteng, the Head of the Accident, Emergency and Orthopaedic Department, Korle-Bu Teaching Hospital made the call in an interview.

“Until the government implements policies to regulate the use of motorbikes especially for commercial purposes, it should ban their operations to save lives. This is what we want,” he said.

This prompted government into action.

According to DSP Obeng, the study which was carried out throughout 2019 confirmed the common reasons why people use Okada and aboboyaas.

However, the DSP said, the study also revealed that “the sentiments of Ghanaians were that, it looks as if you should not allow the tricycles to be used as they are being used.”

Based on the results of the country-wide consultation conducted by the Ministry of Transport, he said that the results show that there is a need to revise the law and supporting policies.

“If you look at the 2012 Road Traffic Regulation policy it looks as if we haven’t got it right. There’s a vacuum and we need to go and occupy it for the users and the owners [of these vehicles],” he stressed.