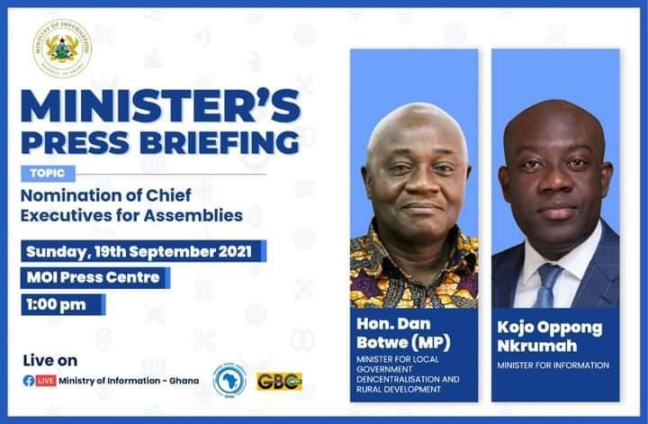 Government through the Ministry of Information will today hold a press briefing to address the issue of appointments of Metropolitan, Municipal, and District Chief Executives (MMDCEs) for President Akufo-Addo’s second term.

According to sources, the Local Government Minister has already received the list of appointed MMDCEs.

This comes after the Director of Communications at the Presidency, Eugene Arhin on Wednesday, indicated that the list of MMDCE nominees has been finalized by President Akufo-Addo.

Taking to social media, he revealed that the said list will on Thursday morning be submitted to the Minister for Local Government and Rural Development, Dan Botwe.

Thus, Ghanaians should “expect the list to be announced by the Minister very soon.”

Earlier, the Minority in Parliament and some members of the general public had expressed concerns over the delay in the appointment of  Metropolitan, Municipal and District Chief Executives by the President.

But President Akufo-Addo has insisted that the delay in nominating Metropolitan, Municipal and District Chief Executives (MMDCEs) has not hampered development in the country.

“There is no vacuum in local government in Ghana as we speak today,” the President said during his two-day tour of the Western North Region.

According to him, he is keen to ensure that all appointed persons are competent enough to handle the responsibility assigned to them and also pledged that the list of nominees will be released before September ending.

Also, the Civil Society Organisations Platform for Good Governance (CSOPGG) is demanding that the President ensures that the list is gender-balanced and inclusive, adding that “at least 30 percent of MMDCEs in every region should be females”.

On Saturday, September 18, the youth of Odododiodoo, one of three constituencies that constitute the Accra Metropolitan Assembly (AMA) in the Greater Accra Region, protested the alleged removal of the current Mayor of Accra from office.

Their action follows rumours that Mohammed Nii Adjei Sowah, will be replaced by Elizabeth Sackey, the former Deputy Minister of the Greater Accra Region in the soon to be announced MMDCEs list.

Meanwhile, the Police Service has arrested four ringleaders involved in the Odododiodoo protest.

The four; Salaami Bukari, 36, Daniel Opare Oman, 43, Edward Holm, 38, and Daniel Clottey, 41, according to a press statement signed by Assistant Commissioner of Police, Kwesi Ofori, led the aggrieved youth to block a section of the road in Jamestown by burning tyres on Saturday.

Mr Mohammed Nii Adjei Sowah, on the matter in a press release sighted by JoyNews, distanced himself from the protests happening in some parts of the city to oppose the alleged selection of a new mayor.

To ensure decorum, the Police service has thrown a word of caution to all persons and groups who intend to embark on unlawful gathering or assembly to reconsider their decision and forfeit such activities.

“We urge everyone to use due process to convey their grievances,” the Service advised.