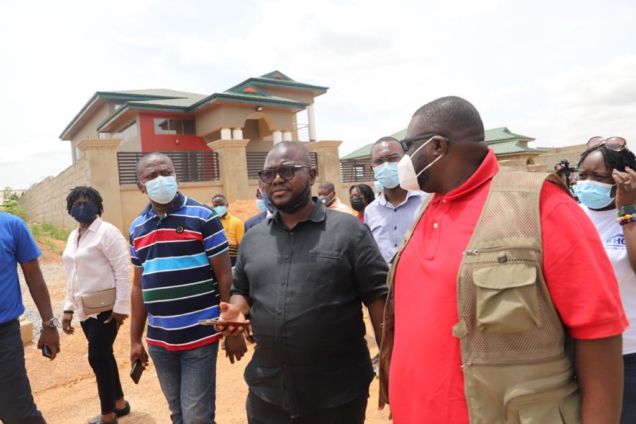 Government is creating what it calls affordable housing enclaves where basic amenities will be provided to reduce the cost burden on private developers.

Minister of Works and Housing, Francis Asenso-Boakye says such public-private partnerships are geared towards reducing the country’s housing deficit.

Under the new housing scheme, the government is expected to secure lands for construction.

Roads and other basic amenities will be provided at the enclave to ease the cost burden on private developers.

With such support, cost incurred by private developers in such constructions will reduce, affecting pricing.

“At Dedesua in Kumasi, the Asantehene has given the ministry land to construct affordable housing project. Soon we will declare the place affordable housing enclave where government will provide basic amenities to reduce burden on State Housing Company, our anchor developer and other private developers”, Francis Asenso Boakye told Luv News as he toured the Ashanti Region.

The State Housing Company will be the anchor for developers to attract other private operators.

“The SHC together with other partners is looking at using the opportunity to reduce housing deficit in the country. It will not only be limited to the Ashanti Region but the Ahafo , Northern, Western North and other parts of the country,” he said.

The Ministry with this new affordable is attempting to meet the government’s affordable housing target by using local construction materials.

Burnt bricks and other known local materials, according to Sector Minister Francis Asenso Boakye, would be integral in new affordable housing units.

Most of the government’s affordable housing units are beyond the reach of low-income earners.

Persistent rise in the price of building materials is ascribed for the high cost of housing construction.

Ghana Statistical Service anticipated growth of cement prices by 3.9 percent in 2019 and 2020.

A market survey showed a bag of cement selling at GHS38 last year has increased to GHS48 and GHS50 depending on the retailer.

Other materials have also realized significant rise in prices.

According to Francis Asenso Boakye, the housing ministry is open to using less expensive but high-quality materials to build affordable housing units.

Ghana has a two-million-unit housing deficit.

To achieve a minimum of 170 thousand housing units annually, the cost of housing construction has to be reduced.

Burnt bricks made from clay is identified as an effective and affordable replacement for cement blocks.

With bricks, the use of iron rods, cement and paints is minimal which mainly contribute to the rising cost of building.

A check on the affordability of bricks at Vicalex Bricks revealed the country though the bricks are affordable, prices can further be reduced if demand and use of the material is high.

The ministry has already commenced lobbying the use of bricks in government building projects, especially in the construction of schools and health facilities.

The sector minister believes the move will help reduce the cost and promotion of the use of public building.

SHC to use local building materials.

The State Housing Company is leading the way in including local materials in housing to help reduce cost of housing.

According to the company, the affordable housing enclave being introduced by government will be first projects to have local materials used.

Managing Director, Kwabena Ampofo Appiah says the company is prepared to accept materials that will help reduce the cost of housing without affecting quality.