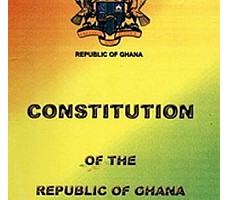 The National Constitutional Reform Coalition is demanding the release of the full report of the Constitution Review Commission (CRC).

The coalition said releasing a white paper as done by the government was simply not enough.

In a statement issued in Accra Monday, the NCRC said the government had a constitutional obligation “to publish the full report of the CRC, in addition to the white paper it has already published.”

Click to read the full statement issued by the NCRC.