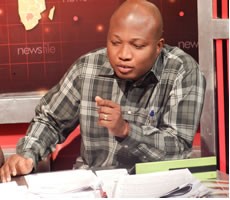 Government has reacted on Friday saying it has observed with amusement attempts by the New Patriotic Party to position itself as a credible alternative in the area of affordable housing and housing for other vulnerable groups.

According to a release issued by Deputy Information Minister Samuel Okudzeto Ablakwa, attempts by the NPP to “whitewash its sordid reputation in housing would not be allowed to stand”.

Read the release in full below:

Government has observed with amusement attempts by the New Patriotic Party to position itself as a credible alternative in the area of affordable housing and housing for other vulnerable groups.

We have also taken notice of the vilification and name calling of President John Dramani Mahama by Mr. Boakye Agyarko at a press conference on this subject area yesterday.

Indeed, the observation is true that it is those who live in glass houses who love to throw stones. We are absolutely amazed that the NPP will gather courage to pontificate on housing, more so housing for the vulnerable.

This latest attempt by the NPP to whitewash its sordid reputation in housing would not be allowed to stand. The truth will be told and the good people of this country would be constantly reminded of the NPP’s cruel and unconscionable record in housing and how the NPP systematically contributed to the current massive housing deficit the country is grappling with as it went down in Ghana’s history as the only party that ruled for 8 years without completing a single affordable housing flat and yet completed many land and bungalow grabs for itself.

First of all, it is important to remind Ghanaians that the latest addition to the many freebies being promised by the desperate NPP Presidential candidate, Nana Akufo-Addo in this year’s election in terms of free housing for Kayayei’s is not exactly strange. In the NPP’s 2000 manifesto, the NPP promised on page 20 that “slums shall be replaced with apartment houses with modern conveniences, which will be cost-effective and environmentally friendly.”

After eight years of NPP rule, not only were the slums left unattended, more slums emerged as one of the terrible legacies of the eight year period of the NPP in which Nana Addo at all material times was a prominent cabinet Minister.

We will not allow the NPP to run away from their true and incontrovertible record in housing. That record is still fresh in the minds of Ghanaians. It is how the NPP focused attention on housing themselves rather than housing the ordinary people of Ghana.

In eight years, did the NPP not see the kayayeis? What about the other vulnerable groups? Did Nana Addo, Mr. Agyarko and the NPP just arrive in Ghana to see the vulnerable for the first time?

Rather than fulfill their own manifesto promise in 2000 of “converting slums to apartment houses with modern conveniences”, they spent all the 8 years grabbing state bungalows and prime lands for themselves.

For instance, it has now become engrained in Ghana’s history that but for Ghanaians voting for the NDC in 2008, the new Foreign Ministry at the Airport Residential Area situated on the International Students Hostel Land would not have been there. That beautiful edifice which will serve all governments, all generations and the State of Ghana would not have been constructed.

Rather, that prime land in such a choice location would have been hosting the private mansions of the following people who paid paltry sums to claim ownership of that land which had hitherto belonged to the people of Ghana:

The obvious question the people of Ghana are asking the NPP is this: didn’t they see the kayayeis and the rest of us when they were busily grabbing all the lands housing themselves for eight years?

The NPP record in housing gets even more bizarre and crueler when one considers the fact that after they had selected prime and choice lands in Accra and Kumasi and taken over state bungalows for themselves, even the Affordable Housing Flats meant for ordinary Ghanaians were not spared.

Whereas the NPP will want Ghanaians to believe that it is the NDC that has denied the good people of this country access to these affordable houses because we have not yet completed them, nothing can be far from the truth.

The stark reality is that but for the NDC winning the 2008 elections, these affordable houses were going to be occupied by the same NPP bigwigs and their cronies who had already looted prime lands and bungalows because though the affordable houses remained uncompleted, they had shared it among themselves.

Government records show that none of the above criteria was observed and as can be seen from the names of beneficiaries above, these were top Ministers of State and their cronies and spouses and not Middle or Junior level public servants. Indeed the records show that qualified Ghanaians who met the criteria and applied were ignored and rather a so-called protocol allocation to themselves was embarked upon by the NPP.

Fellow Ghanaians, it is unconscionable that after the NPP had spent GH¢40 million from HIPC and GH¢31.5 million of workers contributions to SSNIT, the NPP will deny ordinary Ghanaians whose monies were used to construct these houses only to allocate these houses to themselves.

Nana Addo should have been providing answers to this unconscionable and unjustifiable conduct when he met GREDA and not be engaged in futile attempts to rebrand the NPP and make more utopian promises of constructing 100, 000 houses a year whiles attacking the NDC.

Mr. Agyarko should also have been providing answers to their disgraceful conduct in the housing sector when he addressed the press yesterday rather than pouring invectives on President John Mahama.

The other very important point to observe is that given that the NPP had over GHc 70 million to construct affordable houses, it should have concentrated on completing a smaller scope than spreading themselves thin only to busily share the uncompleted flats among themselves.

We have no doubt that Ghanaians are proud of the NDC Government for cancelling those unjustified allocations and ensuring that hardworking Ghanaians who indeed qualify benefit from these houses which we remain committed to complete.

We still hold the firm conviction that rather than leave the North undeveloped and promise free hostels for kayayei, it is more prudent and dignifying to the people of the North to create opportunities for them there in the three Northern Regions so that the poverty gap will be closed.

This is what SADA is about and we are gladdened that we are making progress under this concept. Today there is a new shea nut factory in Buipe, guaranteed prices for shea nut, enhanced mechanized agriculture, new Rice Mills and massive tree planting interventions that have created jobs for the youth.

The people of the North also deserve an economic boom so that they wouldn’t need to migrate down south to serve as anybody’s slave just for so-called greener pastures. Our paradigm is visionary and dignifying as opposed to those who intend compounding the problem just because they seek immediate votes.