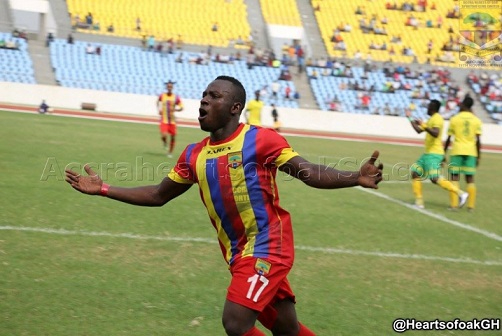 The Phobians have the chance to move level on points with league leaders AshGold if they are able to engineer a win against the Sharks on Saturday.

Hearts have not had the perfect start to the season, but the inconsistency of their rivals means they are not far from the top of the table. Coach Henry Wellington’s charges lost heavily to Berekum Chelsea on matchday five, receiving a 3-0 battering at the Golden City Park.

However, the Accra giants recovered superbly in midweek to claim a 3-1 win over Wa All Stars. Now, another major test looms as Elmina Sharks make the short trip to Cape Coast (Hearts' adopted home) on Saturday.

Although Hearts currently find themselves in third position whiles the Sharks sit seventh, both sides are separated by just two points.

Their tabular proximity in point difference means that the Elmina-based side could actually usurp Wellington’s team with a win. Having also played a game less than Hearts, the Sharks find themselves in good standing with just one loss in the last five league games.

This fixture is very young in the Ghana Premier League, with both clubs having met just twice. From those previous meetings, though, Hearts hold the upper hand, having won once and drawn the other.

And it is obvious the Phobians will be targeting another win as they aim for a first league title since 2009.

Wellington was highly critical of his players despite their win over Wa All Stars in midweek. The gaffer was unimpressed with the character of his boys and emphasized that he would work on that before the Sharks game.

"We play at home with this character [and I] am not impressed at all,” Wellington told the media. "When you are playing a match you have to be fully concentrating after ninety minutes, you have to be fully focus on the field. Although we won but l have to talk to my players.”

Meanwhile, managerial counterpart Yaw Acheampong has set the target of a top four finish for the Sharks and a win on Saturday will be more than welcome in Elmina.

The game will be televised by StarTimes on Saturday at 3pm.