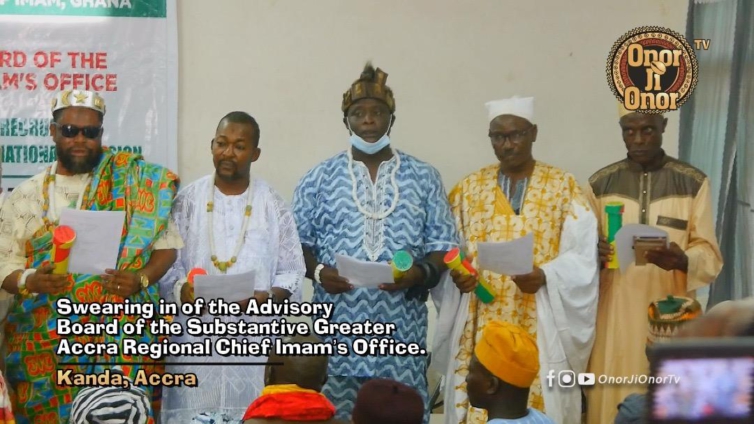 The Greater Accra Regional office of the Chief Imam has inaugurated its first Advisory Board to aid in the development and progress of the Islamic religion in the country.

The 16-member board include the Board Chairman, Zongo Chief of Nii Okaiman, Abubakar Muhasinu Samori, Board Secretary, Sheikh Mohammed Jibril Sissy Nii On ya Folo- Chief of Anya Zongo, Nene Gamu Afienya I, and Abubakar Afutu Narh, President Council of GaDangme Muslim Chiefs,

Speaking at the inauguration ceremony Saturday, the Executive Secretary at the Office, Sultan Ahmed Nii Nortey Caesar, said the core mandate of the Board was to advise and formulate policies for the office to propagate, educate and preach peace about the Islamic Religion and other religious practices.

According to him, the Board is to help steer the affairs of the office and to ensure the good welfare of Muslims in the region.

Also, the Board is to advise the Regional Chief Imam’s Office on how they could streamline development to benefit the Muslim communities in Greater Accra and beyond.

Sultan Caesar said the inclusion of most of the Heads of every tribe or ethnic groups in the board indicated the commitment of the office to bring unity into the Muslim Umah in the region.

This, Sultan Caeser said would minimise the marginalisation of Muslim children in various schools across the country.

He, however, advised the other religious bodies to do away with religious problems, adding that the country did not need that in its current state of development.

“We should try to avoid issues that will trigger religious problems in the country,” he reiterated.

Sultan Caesar then urged Ghanaian Muslims to celebrate the upcoming Edul-Fitr festival with strict adherence to the Covid-19 protocols.

The New Chairman of the Advisory Board in his address said he was glad to be part of such a group of people to help in shaping the progress of the Islamic religion in the country.

He assured that the board members including himself would conduct the business of the Board in compliance with the constitution and bylaws of the Regional Chief Imam’s office to help bring progress to Muslims in the religion.

DISCLAIMER: The Views, Comments, Opinions, Contributions and Statements made by Readers and Contributors on this platform do not necessarily represent the views or policy of Multimedia Group Limited.
Tags:
Greater Accra Regional Chief Imam
Inauguration of 16 member board
Sultan Ahmed Nii Nortey Caesar