Guardiola believes Foden can get better after his brace against Brighton - MyJoyOnline.com

Guardiola believes Foden can get better after his brace against Brighton 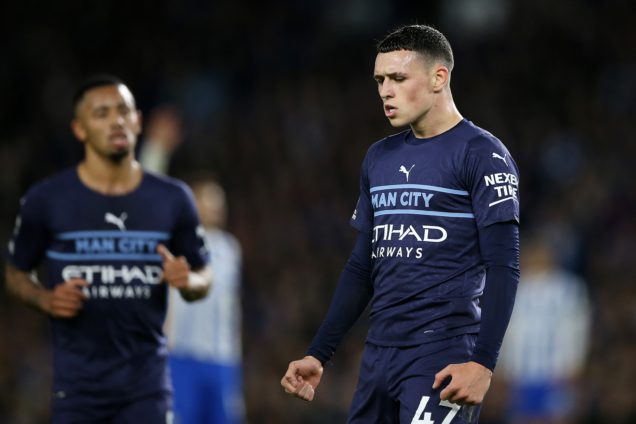 Pep Guardiola believes versatile Phil Foden can still get better after he scored twice as Manchester City produced a devastating first-half display to beat Brighton and move up to second in the Premier League.

Foden, playing as a forward against the Seagulls, took his tally to four for the season with his brace as he helped make sure of a win that moved City up to second, two points behind leaders Chelsea.

The 21-year-old has played in a number of positions this season and Guardiola praised the versatility of the England international, and warned there is even more to come from him.

“In the final third he can play up front, has the quality to move and be aggressive one on one and arrive in the box. He can play as a false nine, a winger, wide right or wide left,” said the City boss.

“He is a guy who is a midfield player with a big sense of the goal. He is still young and still has a margin to improve.”

Brighton could have gone above City with a win but simply could not cope with the away side’s sweeping attacks as they scored three goals in 31 minutes.

A brilliant hooked clearance off the line by Lewis Dunk from Gabriel Jesus’ shot in the 10th minute was only a brief reprieve for the hosts as City took the lead three minutes later.

Seagulls goalkeeper Robert Sanchez dropped a routine save from a deflected shot at the feet of Bernardo Silva, who quickly found Ilkay Gundogan to score from close range.

The visitors made it 2-0 after a devastatingly quick break from a Brighton attack, charging up the pitch before Jack Grealish flicked the ball into Foden’s path and the forward made no mistake for his third goal of the season.

Foden got his fourth of the campaign just moments later as Jesus’ shot deflected off him after Sanchez could only stab away Grealish’s low effort at the near post.

The England international almost got his hat-trick just before half-time but Sanchez made a fine save to keep out a curling effort.

Brighton were better after the break and Ederson had to be alert to keep out decent efforts from Pascal Gross and Leandro Trossard.

Ederson was finally beaten in the closing stages when Enock Mwepu was brought down inside the box and Alexis Mac Allister just managed to get the ball past the City goalkeeper’s dive.

Brighton came from two goals down to beat Guardiola’s side last season but there was to be no fightback this time as City wrapped up the win when an unmarked Riyad Mahrez rifled home in stoppage time as the visitors moved back to within two points of leaders Chelsea.

“I was impressed with everybody in reference to the second half,” said Brighton boss Graham Potter.

“I wouldn’t want to single anyone out, the first goal was soft from our perspective. I couldn’t have been more proud of the boys and what they gave.”