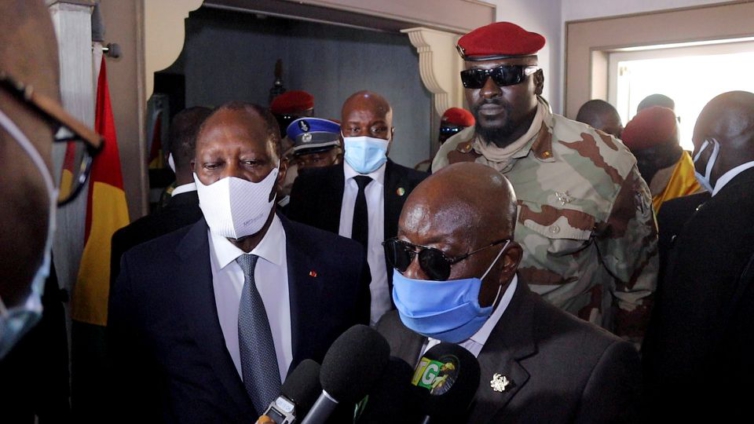 The leader of Guinea’s recent coup told a delegation of West African leaders he was not concerned about new sanctions imposed by the regional bloc to pressure a swift transition to constitutional rule, the junta’s spokesman said on Saturday.

The Economic Community of West African States (ECOWAS) agreed on Thursday to freeze the financial assets of the junta and their relatives and bar them from travelling in response to the Sept. 5 ouster of President Alpha Conde.

Coup leader Mamady Doumbouya has shrugged off the move, telling high-level ECOWAS envoys that “as soldiers, their work is in Guinea and there is nothing to freeze in their accounts,” junta spokesman Amara Camara said at a briefing.

The comment was made at talks between Doumbouya and the Ivorian and Ghanaian presidents, Alassane Ouattara and Nana Akufo-Addo, who visited Conakry on Friday in an unsuccessful effort to secure Conde’s release.

The bloc’s decision to impose sanctions reflects members’ desire to deter a further democratic backslide in the region after four military-led coups in West and Central Africa since last year.

They have demanded a six-month transition in Guinea. In response, Doumbouya told the delegation the will of the Guinean people should be taken into account, Camara said.

Over the past week, the junta has held consultations with public figures and business leaders to map out a framework for a transitional government. It has not yet commented on the results of these talks or said what timeline it has in mind for the transition.

ECOWAS’s credibility in Guinea has been strained since 2018, when the bloc failed to condemn Conde for running for a third term in office last year, despite a law declaring that presidents must step down after two terms.

Doumbouya and other soldiers behind the coup have said they ousted Conde because of concerns about poverty and corruption.

DISCLAIMER: The Views, Comments, Opinions, Contributions and Statements made by Readers and Contributors on this platform do not necessarily represent the views or policy of Multimedia Group Limited.
Tags:
Akufo-Addo
Coup
ECOWAS
Guinea
Mamady Doumbouya