Two people have been killed and 12 others wounded, one of them critically, by a gunman who opened fire on a busy avenue in Canada's largest city.

One of the dead was a young woman, while the person critically injured in the attack in the Greektown district of Toronto is a girl of eight or nine.

The suspect, 29, had "an exchange of gunfire" with police officers before being found dead nearby, police said.

The motive for the shooting is unclear. Police have not identified the suspect.

The attack erupted on Sunday evening. In a video clip shared by Canadian media, a white man wearing a dark cap and dark clothing and carrying a shoulder bag can be seen stopping on a pavement and pulling out a handgun before firing shots.

Prime Minister Justin Trudeau sent his sympathies to the victims and the city in a tweet, while Toronto Mayor John Tory condemned the "despicable" attack on "people innocently enjoying a Sunday evening".

Emergency services were called out just after 22:00 (02:00 GMT Monday). The site of the attack is a piazza with a fountain that is popular with local people and was busy at the time, the Toronto Globe and Mail writes.

A number of people were reportedly hurt in a cafe called the Demetres, while others were hit in the street.

One victim's death was reported soon after the attack, with the second death announced on Monday morning.

According to police, the gunman was found on Bowden Street, a short distance from the cafe. "An exchange of gunfire" then took place, before the man fled once more.

He was found dead on Danforth Avenue. 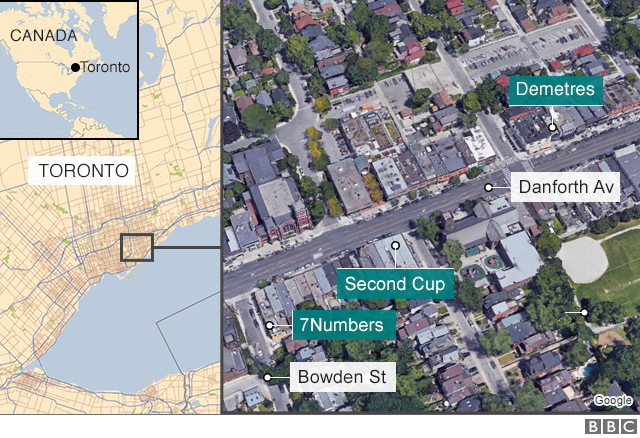 Andrew Mantzios had been drinking coffee with friends by the fountain when he heard shots and turned around to see the gunman coming towards his group.

"He had this horrible expression on his face," Mr Mantzios was quoted as saying by the paper.

The gunman fired at a crowd of people waiting to cross the street, he said.

"And then a lady tried to run and she fell down. He turned around and shot her point blank, two or three times."

Mr Mantzios and his friends dropped to the ground for cover and watched as the attacker criss-crossed the avenue, shooting into businesses.

Dennis Helm was getting ready for bed when he heard the gunfire.

He lives a block south from where the shooting took place and his windows were open to catch a breeze on the warm night.

"There were 10 rapid [shots], a break, and a few more," he told the BBC on Monday morning.

Paramedics could be seen performing CPR on the injured around the piazza afterwards, the Globe and Mail reports.

After police sealed off the scene of the attack, upturned coffee cups could be seen being used behind the ticker tape to mark evidence.

Disbelief in one of Toronto's 'villages'

The Danforth – usually a busy strip for commuters – was quiet and empty on Monday morning.

Police tape cordoned off multiple blocks of the main commercial stretch as detectives continued their search for evidence.

"It's really terrible and unprecedented," says Anita Nador, who lives just blocks away from where the shooting took place.

The neighbourhood is the closest residential area to the city's downtown core and she says it's a close-knit community.

People who live near the Danforth know their local shopkeepers, know each other from the dog park or their children's school.

"People think of Toronto as a big city – nobody knows each other – but it's really a series of villages," she says.

While those I spoke with reacted with shock and disbelief regarding the news, many were all careful to note that Toronto is still one of the safest North American cities.

What do we know of the attacker?

Very little. Toronto police have not named him, or given any details other than his age (29).

It is unclear whether he was shot by police or killed himself. 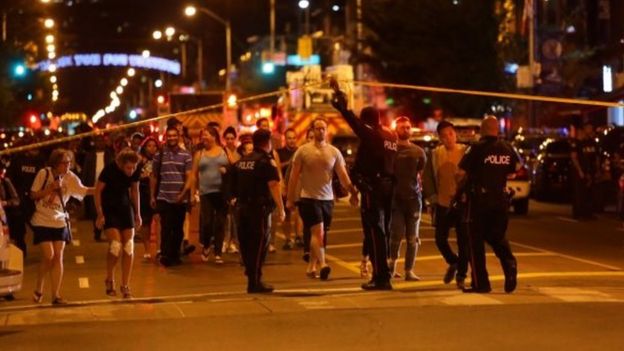 Police evacuated people from the area

Jessica Young, an employee at the Second Cup cafe, said she had seen the gunman's face before he fired through the window.

She told the Toronto Star newspaper: "He was probably no taller than me, wearing a black baseball cap, dark clothes. He had light skin. I think he had short facial hair. That's all I could make out."

Nobody was hurt in her cafe, she added.

Is Toronto known for gun violence?

Gun violence is much rarer in Canada than over the border in the US, but Toronto has seen attacks increase dramatically in recent years. 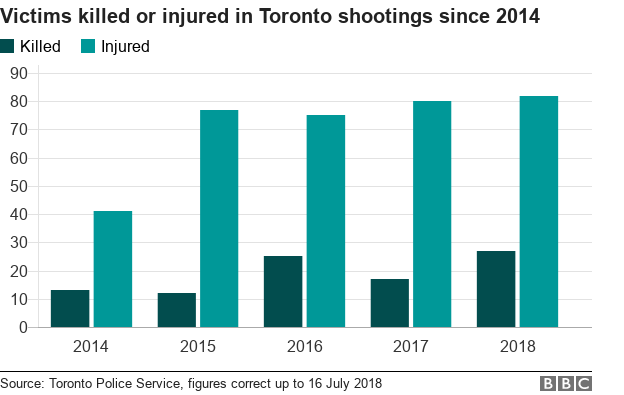 Shootings in the city over a holiday weekend earlier this month led to Mayor Tory saying he was working to get more police patrolling the streets.

Gun control has often sparked divisive debates in Canada, which has a large rural population where guns are widely owned and used.