Has World War 3 been declared? How Russia vs USA tension over Syria could spark global conflict 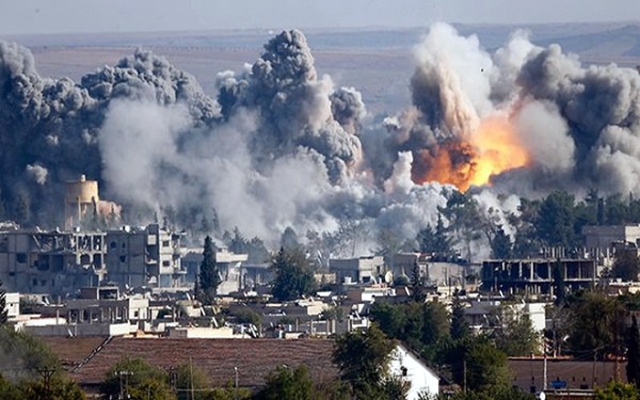 The world is currently on high alert with tensions between the US and Russia over Syria boiling over.

Adding North Korea's nuclear ambitions into the mix, an all-out war could be on the cards – but just who would win if World War 3 broke out? We explore the options.

As the world comes under fire from terror attacks, escalating hostility between Russia and the US, and repeated shows of strength from the North Korean regime, a full-blown war could soon be more likely than ever.

• April 16: Kim Jong-Un raged that Britain moving Navy ships close to North Korean waters is “nothing short of an act of war”.

• April 14: Donald Trump announces a coalition of US, UK and French forces have launched a coordinated air strike. The MoD deem the mission a success. Theresa May says there was "no alternative" to military force. Russia warns that there "will be consequences" following the raids.

• April 12: Cabinet backed UK intervention in Syria "to deter the further use of chemical weapons by the Assad regime".

• April 11:  Defence chiefs in Russia say they will respond "immediately" if their military units in Syria are hit in any US airstrikes.

• April 11: Russia's ambassador to Lebanon has said US missiles fired at Syria would be shot down and the launch sites targeted.

• March 14: Russia said there would be retaliation if the UK implemented any new measures and a spokeswoman for the Russian foreign ministry said Britain must not try to threaten Moscow, pointing to Putin’s recent speech in which he presented a range of new nuclear weapons. Trump has said the US sides with the UK.

• March 13: After the poisoning of former Russian spy Sergei Skripal and his daughter, Prime Minister Theresa May threatened to implement a range of possible reprisals against Russia.

• December 26: Following another round of sanctions, it was reported Kim was planning to launch a satellite which would actually mask another nuclear missile test.

• November 28: Kim Jong-un proudly declared North Korea a nuclear state after successfully launching a more powerful ICBM Hwasong-15. The rocket flew for around 50 minutes and travelled just over 600 miles before coming down in the Sea of Japan.

• October 31: US and Russian nuclear bombers fly near North Korea, while reports in Japan say a Kim regime nuclear facility has collapsed with 200 people inside.

• October 23: Trump has put nuclear bombers back on 24-hour alert for the first time since the end of the Cold War.

• October 21: Supersonic US B-1B strategic bombers zoomed over South Korea as part of an air show prompting Kim to warn the Korean peninsula is on the “eve of explosion”

• October 7: Trump issues chilling threat to North Korea, insisting "only one thing will work" when dealing with the rogue state.

• September 26: North Korea moved jet fighters to the coast to intercept US bombers.

• September 15: North Korea fired a ballistic missile over Japan and into the Pacific,responding to new UN sanctions with its furthest-ever missile flight.

• September 10/11: Two Hwasong-14 intercontinental ballistic missiles were test-fired with a range of more than 6,210 miles.

• September 6: North Korea promised a "redoubling" of its nuclear arsenal in response to threatened sanctions and warned the US faced "catastrophic consequences".

• September 4: James Mattis, the US Defence Secretary, warned of a "massive military response" to any threat from North Korea against the United States or its allies.

• September 3: The West awakes to the news North Korea has detonated a nuclear device in a test. The blast triggered an artificial earthquake six times larger than any previous test.

• August 31: The US responded to Kim Jing-un's latest missile outrage with a terrifying show of strength, dropping huge bombs near the North Korean border.

• August 29: Officials confirmed the North's missile launch. The "unidentified projectile" hurtled over the country before breaking into pieces, according to South Korea's military.

• August 28: It was reported that North Korea had fired a missile towards northern Japan. Residents were called to take immediate shelter underground.

• August 15: North Korea appeared to back down from an imminent strike by saying Kim Jong-un would watch "the foolish and stupid conduct of the Yankees" before deciding whether to fire on Guam.

• August 11: The Sun revealed Britain would play no part in a military strike on the communist state in a move that was slammed as “weak and ill-judged" by ex-Commander of British Forces Afghanistan Colonel Richard Kemp.

• August 10: North Korean state media said it was planning to launch four rockets towards the US territory of Guam.

• August 10: Trump declared North Korea "better get their act together" or they will be in trouble like "few nations have ever been". He also suggested he might not have been tough enough with his previous comments on the rogue state.

• August 8: Trump warned North Korea faces “fire and fury” if  it threatens the US – as intelligence documents reveal Kim Jong-un has made mini nukes to attach to his new rockets

• July 31: It was reported that Donald Trump was ready to order a military strikeagainst a North Korean nuclear weapons facility hidden beneath a mountain range.

• July 5: North Korea test-fired a ballistic missile which analysts say has a range of 6,700 kilometres and brings Alaska within reach. Pyongyang later said it was a “landmark” test of a Hwasong-14 intercontinental ballistic missile.  Trump responded with an tweet saying; "Does this guy have anything better to do with his life?".

• May 5: Pyongyang announced it would seek the extradition of anyone involved in what it says was a CIA-backed plot to kill leader Kim Jung-un with a biochemical poison

• May 11: The hermit state said that it has the right to “ruthlessly punish” any US citizens after it detained a fourth American at the start of May

• May 2: Kim Jong-un warned that it would be a "piece of cake" to nuke Japan – warning that those who tried to retaliate and their supports would not be safe

• April 28: North Korea launched a devastating attack on the US Capitol to spark World War Three in a terrifying propaganda film.

• April 19: Vice President Mike Pence warned Kim Jong-un the US would "defeat any attack" as he spoke to soldiers aboard a massive aircraft carrier.

• April 14: During parades marking 105 years since the state’s founder Kim Il-sung was born, a devastating arsenal was on show including a KN-08 rocket, thought to be capable of flying more than 7,000 miles – within range of Los Angeles, New York and Washington DC. But experts have since questioned if the weapons were genuine.

• April 9: A US strike force was sent towards the western Pacific Ocean near the Korean peninsula.

Who would win the war?

It is impossible to say who would win a conflict.

Donald Trump said his first order as president was to renovate and modernise America's nuclear arsenal, which he claims is "now far stronger and more powerful than ever before".

North Korea has been relentless in its nuclear tests and it is now believed the rogue state has missiles capable of hitting US territories.

The US is the only country in possession of fifth-gen fighter planes – 187 F-22 jets, plus the F-35 which is not yet out of the testing phase.

However, Russia is developing a new stealth fighter nicknamed The Ghost and China is working on four.

What happened in Syria?

Aid workers reported dozens of people were killed by poison gas – many of them young children  – following the attack on the rebel-held town.

Official sources said at least 70 people had died in the atrocity late on Saturday, April 7, 2018, in the besieged town of Douma.

Harrowing footage showed victims with yellowed skin crumpled on the ground and foaming at the mouth.

And on April 12, it was revealed that victims of the attack had tested positive for chemicals including chlorine and a nerve agent substance.

US officials who obtained blood and urine samples from victims were said to be "confident" in the intelligence, but not 100 percent sure, MSNBC reported.

Douma is the last remaining opposition-held town in Eastern Ghouta, once the rebels' main bastion outside Damascus but now ravaged by a seven-week regime assault.

Since February 18, Syrian and Russian forces have waged a fierce military onslaught.

While no one has yet provided evidence of its involvement, Syrian President Bashar al-Assad's regime has been repeatedly accused of using chemical weapons.

America and its allies have reportedly compiled a dossier of intelligence – including images – which indicate that the Syrian government was behind the Douma atrocity.

An emergency two-hour War Cabinet meeting on the evening of April 12 backed the UK joining US strikes against Assad following in response to the attack.

The PM’s top Ministers agreed it was “vital that the use of chemical weapons did not go unchallenged” in the emergency Downing Street summit.

Who has the strongest military?

North Korea has around 1.02 million military personnel and 73 submarines – more than Russia and the US.

The nation also has access to 4,060 tanks, but only has 286 helicopters and three warships.