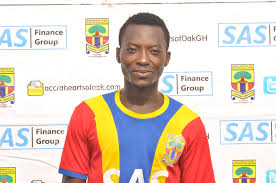 Hearts of Oak general captain Kofi Abanga has issued a rallying call to fans to fill the stands when the team faces Esperance this Saturday.

The game will be the return leg in the Caf Confederation Cup third round. Hearts trail 4-0.

Abanga believes an electric atmosphere could intimidate the Tunisians and propel the Phobians to overturn the deficit.

The midfielder also pleaded with his teammates to put their recent salary disputes behind them in order to produce a sterling performance.

Speaking on Best FM, he confirmed delays in payment of salaries for the players but felt he and his teammates can do the nation proud should they put this niggling issue behind them.

Hearts of Oak are looking to enter the money zone of the Caf Confederations Cup for the first time after winning the maiden competition in 2005.