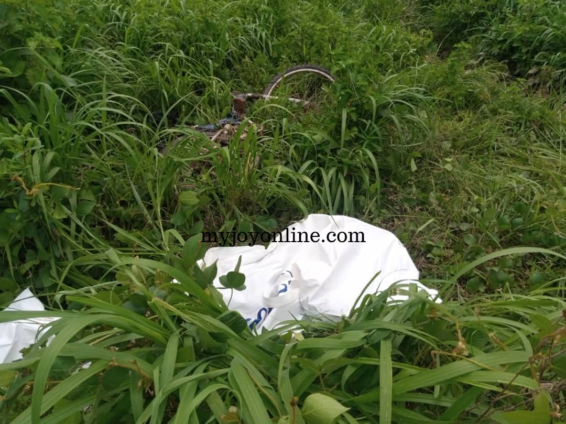 A heavy downpour Thursday evening claimed the life of a middle-aged man in the Savannah Region.

The man’s remains were discovered Friday, August 27, together with his bicycle around Frafra Number 6 Valley, by some residents in the West Gonja Municipality.

The corpse, which is yet to be identified, is suspected to have been washed away by the heavy downpour, which also flooded some households and washed off feeder roads in the community.

Narrating the incident to JoyNews, the Assembly Member for Canteen Electoral Area, Ananpansah B. Abraham, said his attention was drawn to the motionless body by some residents in the community.

Mr Ananpansah said he later confirmed the incident when he visited the scene together with some elders and youth of Frafra Numbers 6.

“We have since launched a complaint at the Damongo Police command. Even though the identity and cause of death are not immediately known, we are suspecting that the heavy downpour could have deposited the helpless man at the location,” he stated.

He also indicated that all the necessary steps and formalities have been put in place, “we, together with Police are currently on our way to convey the body, which is yet to be identified, to the West Gonja Hospital for preservation,” Mr Abraham added.

But as at the time JoyNews was leaving the scene, the youth in the community were still mobilising more hands to enable them first tow the Police Pick up vehicle which got stuck in the mud at the scene of the incident.